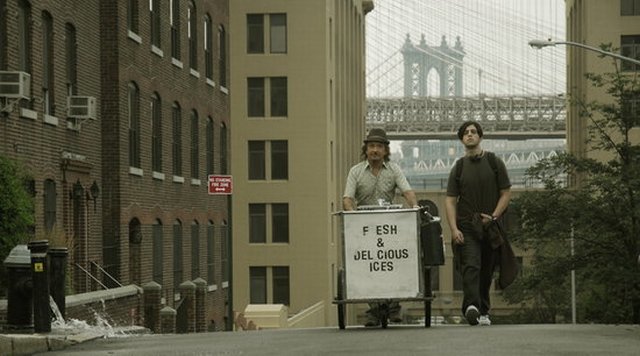 This week, Sir Ben gets groovy in The Wackness, Will Ferrell continues to coast on his comic abilities in Step Brothers and the comeback no-one was waiting for with Vin Diesel in Babylon AD.

Scarily for those of us that remember it very clearly, 1994 is now deemed long ago enough to warrant a period drama. The Wackness is set in that distant age and is baked in authentic New York detail (crime, hip-hop and Giuliani apparently) and is about a teenager drifting around the city selling dope from an ice cream cart. He becomes friends with a hippy shrink played by the astonishingly versatile Sir Ben Kingsley. The Guardian (3-stars) finds it to be an “amiable comedy” in which “Sir Ben is enjoying himself hugely, and so, up to a point, will you.” The Independent (3-stars) thinks that “the film's forlorn charm is a little reminiscent of Cameron Crowe's adolescent memoir Almost Famous. It's a tiny bit soppy, too, but you can forgive that in a teenager”. However it’s The Times that is most impressed (4-stars) saying “writer-director, Jonathan Levine, lavishes the movie with inky black shadows and soft gauzy close-ups, making it mostly feel like a dream, or a half-conjured memory.” The film also features one of the more astonishing sights of the cinematic year, the fully certified Knight of the Realm that is Sir Ben making out with an Olson twin. Remarkable.

This week in 'Not Quite Crap But Not That Good Either' Comedy Corner we have Step Brothers starring Will Ferrell and John C Reilly as overgrown forty-something adolescents forced to share a room. It gets 2-stars from all the critics. The Times thinks it's “just rude and sharp enough to touch a nerve with infantile adults”, which is a pretty large target market. For The Independent the comedy wears thin, “for a while their stupid rivalry, insults and petulant displays of outrage are funny, but like the talented child who won't be quiet for a second, the act eventually begins to grate”, while The Guardian thinks there are “are certainly one or two funny, broad moments”. You can't help but feel that Ferrell is starting to waste his huge comic talent in a stream of average comedies. We know he's better than that. Ron Burgundy, it's time for an encore.

Next up Babylon AD.

For a happy while it looked like Vin Diesel might have been banished from making films. Maybe someone important had finally noticed how consistently rubbish he is? Sadly not, as he’s returned in Babylon AD, a nonsensical looking action film. It looks bad, and the Independent thinks it is, coughing up a single star saying the “action has the crazed, over-edited ruckus of a death-metal video.” However over at the Guardian, Peter Bradshaw seems wryly amused by it all and generously slaps 3-stars across Vin Diesel's bald head. “What an endearingly shambolic action hero Diesel is. He mumbles his lines as though he's leafing through the script at the read-through, and sports an air of perplexed annoyance that suggests he thought he'd signed up for a different movie altogether.” We really shouldn’t encourage him, Peter.

The best reviewed release of the week by a long way is Times and Winds, a Turkish film about a group of teenage boys growing up in a rural village. The praise for it comes no greater than Peter Bradshaw’s 5-star rhapsody in the Guardian. He concludes “Times and Winds is a remarkable piece of work, conceived at the highest pitch of intelligence: it is a cinematic poem, replete with fear and rapture, and one of the best films of the year.” Praise doesn’t come much higher than that.

If you’re in the mood for something classy and classic then it has to be the re-released Badlands, Terence Malick’s masterful road movie starring Martin Sheen and Sissy Spacek that will look stunning on the big screen. As The Times (5-stars) says, “What gives the film such monumental presence are the huge raw landscapes that Malick uses to frame the surreal journey to remote gas stations and far-flung hovels. These desolate vistas seem to ache. Malick has never quite recaptured the cruel magic. Badlands is the American West as a heartbreaking wasteland where dreams are exposed and crushed by the elements.”

Next week, Guy Ritchie returns to his mockney roots in the coldy anticipated Rockrolla which, statistically, is likely to be better than his last film, the truly dire Revolver. We also have Keira Knightly pouting as only she knows how in The Duchess.