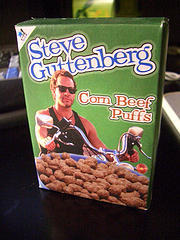 Oh, panto fans in Bromley, how we envy you right now! You are in for such a treat! Esteemed eighties thespian Steve Guttenberg is taking on the role of "Baron Hard-up" the production of Cinderella, which opens on 5 December.

Steve (we like to think we can call him Steve) has had kind of a tough time in the press lately, what with giving slightly insane sounding interviews to New York newspapers and appearing to attack photographers. And, over twenty years after the fact, he's still referred to as "star of Police Academy and Three Men and a Baby", rather than the star of any of his recent non-hit films. It's not easy being Steve Guttenberg.

So, of course, it's off to Bromley and legitimate panto theatre to get him back to his roots:

Guttenberg said: "I appreciate being invited to participate in such a time honoured tradition. I am looking forward to the fun of performing in Bromley."

He added: "There is everything an actor needs to practise his craft with an entertaining show and a talented cast."

He'll be appearing alongside Helen Lederer, who will be playing the Fairy Godmother.

Although there have been loads of Hollywood stars who've appeared in pantos, we somehow find it especially delightful that Steve Guttenberg's heading to Bromley. After all, isn't a background in cheesy comedies of the mid to late eighties the perfect background for panto?