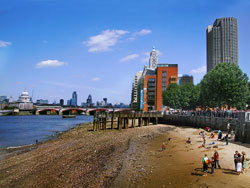 Honestly, what is it about properties being mistaken for sin-ridden dens of iniquity? Weeks after a Staines house was confused with a nearby bordello, police have now stepped in and closed down a Kilburn naturist club.

The Soho Beach House on Kilburn High Road, promoted as a venue where folk can get their kit off, was shut last night after Camden Council stripped it of its license. A police dossier revealed that, over a six month period, various priapic detritus was discovered including used condoms, traces of cocaine and reports from officers that women were available for the curiously exact price of £120. The Beach House's license allowed it to employ masseuses for customer use, but sex was strictly off the menu, hence the council's decision to step in.

But the owner says it's all just a tragic misunderstanding. According to Douglas Ifedha's confusing story, the fee was merely a cover charge to a night of drinking and debauchery, but certainly with no sex, oh no. Except, er, "it's a swingers party.... there might be sex going on". Oh, and only the men pay for entry. And the women are dressed in bikinis. Suddenly his story doesn't seem so watertight.

Another kind of London beach from Martin...H's Flickrstream