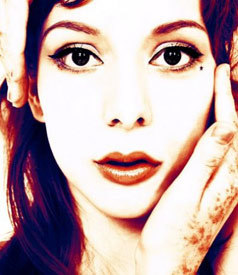 London girl Catherine Anne Davies has had some outstanding press, so with high hopes we attended her gig at Bush Hall on Thursday night. A fair size audience, made up largely of young indie chicks and industry heads, demonstrated Catherine's growing popularity - a singer described by the NME as "How Kate Bush would sound if she died and went to hell" (which is supposed to be a compliment).

Described as a 'gothic folk chanteuse' and often compared to the likes of Tori Amos, Cat Power, Regina Spektor and Joanna Newsom, with a build up like that she was undoubtedly and understandably nervous during her hour-long concert.

Her voice is her strength. Even listening to her on-line can send a tingle down your spine. Yet live, in a sweaty hall, the stark beauty of her dulcet tones felt slightly lost. Whether it was the sound engineering, the acoustics of the hall, or the fact that her band were drowned out by large fans cooling the August night, something felt wrong. And her voice, which is normally so haunting, almost ethereal, seemed to be fighting against the sound of the other band members. The best tunes came when Catherine moved to her keyboard, and sang with only a double bass and violin accompaniment.

However, as one of the Southbank Centre's Emerging Artists in Residence (EAR) she's in the vanguard of hot, talented London and is definitely one to watch, and worth taking the time to see live - before her gigs start selling out.