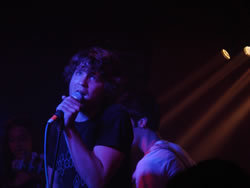 The New York university system seems to be doing well at the moment - first they turned out the amazing Vampire Weekend, and now Syracuse, New York, has turned out the brilliant Ra Ra Riot who played a headlining set at Monto Water Rats last night. Things got hot and sweaty as they ploughed through their 45 minute set in the tiny backroom, playing with so much energy you'd barely believe they've played a gig every night this week.

Earlier in the evening, The Daves warmed things up a bit with their radio-friendly anthems. They're just like Dave TV too - a guilty pleasure, nice to dip in and out of, but also very predictable and unoriginal. Quickly followed by In Between Days, who sounded a bit like Lostprophets in a mixing pot with Biffy Clyro - good, but not really main-support material.

However there was no hiding who we were there for - Ra Ra Riot came on and gave us their rather unique mix of traditional bass, drums, guitar and keys augmented by violin and cello with enough energy to get everyone dancing, even the boring post-work crowd complete with unimpressed girlfriends. By the end of their set everyone was dancing like it was 1999, drenched in sweat with derranged smiles on their faces. As lead singer Wesley Miles commented: "This may not be our biggest gig this week, but you're certainly the liveliest!"

Closing out their set with the double header of current single "Ghost Under Rocks" and previous single "Dying is Easy", it was amazing that the six of them managed to stay on stage long with the amount they were bouncing into each other, falling over and generally having an amazing time. The poor soundguys were going to have fun - the cables of mics and guitars were amazingly well entangled from their antics.

Even if you haven't heard of Ra Ra Riot go and check them out now - they may not make it to the big time, but they might just be one of your favourite secret bands.