By NeilA Last edited 146 months ago
NeilA The Saturday Strangeness 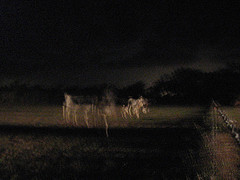 I've often been intrigued by reports of phantom animals, especially horses when they are seen to be leading a carriage through some misty backroad of a night. What perplexes me most is the fact that if inanimate objects have no souls, then why should the coach appear alongside the horses? And, if the horses never died together or with the coach, then why should they appear coupled in the ethereal void? Have there ever been sightings of a stagecoacch drawn by nothing, or spectral horses drawing an invisible carriage? It seems not.

The huge gates of Black Horse Yard, at Windsor, are situated on the main Windsor to London road, which is flanked by houses built during the eighteenth century. It is here that one particular apparition is said to appear, ominously before the death of a monarch. A ghostly coach, and horses, is said to roar from the shadows where an old inn used to stand, and gallops towards the Windsor Park gates at great speed. Of course, no-one knows where the procession goes because it often fades into the gloom of night before its destination.

Rumour has it that the phantom carriage, pulled by two magnificent black horses, also consists of a third ghost, that being of a royal physician who was tending to King Charles II before his death. Although no relatively modern sightings of the spectral coach have been reported, its last appearance certainly suggests that, as a spirit, it is indeed an omen of death, because it was Edward VII who appeared gravely ill the last time the manifestation took to the streets.

However, this leaves the researcher with many unanswered questions. Does the spectral coach, the horses and the ghostly physician display some kind of intelligence beyond the comprehension of science and understanding? Or is the spooky scenario simply a continuous playback, embedded in the fabric of time to forever play back when a tragedy is about to strike?

These type of hauntings may suggest a mere recording of a past event, but if so, how on Earth does an historical gaggle of ghosts know when someone is going to die?

Whatever your belief, these historical enigmas continue to operate outside of their own timeline suggesting something, possibly in the human brain, triggers their existence.