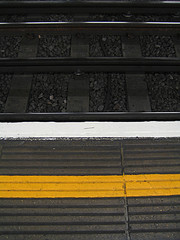 Urban legends are often considered myths, or 'friend of a friend' tales (FOAFtales), which differ from classic mysteries in the sense that they are perceived as exaggerated yarns. London has many such tales from its dark, foggy corners, but there is one such story which has become criminally forgotten, and for me remains one of the capital's most horrifying legends – namely 'The Maniac On The Platform' first discussed by folklorist Michael Goss back in 1985. Other such 'urban legends', for example, are phantom hitchhikers, or in the case of New York, alleged alligators said to inhabit the sewer systems. However the so-called platform maniac, said to haunt crowded platforms on the London Underground, would have once equalled even larger scale myths of the world if it had got out of hand.

Michael Goss first heard about the phantom when travelling on the Circle Line between Blackfriars and Embankment in the February 1985. Of course, no-one has ever actually seen the so-called maniac, who is said to be an elusive serial killer who prowls the tunnels looking for hapless victims. And what does he do to these victims...?

Rumour has it that the mystery figure waits for a train to approach and then in sly fashion pushes his target onto the rails to certain death. Back in the 1980s many people spoke of the apparition, it was all hearsay of course, but that's what made the legend spread like wildfire, everyone with their own version of events pertaining to the lunatic. Whispers also spread that at the time the police knew of the killings but would not speak of such as it may have provoked copycat murders.

The maniac was stone-cold fact to everyone, just like the legend of the psychopath said to haunt nightclubs around London and the south-east, injecting people's hands with a secretive syringe and leaving a note in their pocket, which they would read in the morning, saying "Welcome to the AIDS club". Chilling stuff.

We are all prone to conspiracy theories, and the maniac on the London Underground was always out there, and every accident that began to occur on the platforms just may well have been a well disguised killing. Classic folklore. Of course, the London Underground is a perfect place to harbour such eerie legends. Ghosts, giant rats and a race of flesh-eating humanoids are also said to lurk in the gloom, but none of these spectres have ever been seen... have they?

A typical victim of the maniac on the platform will always be known by a friend of a friend whose friend knew the victim's mother etc, etc. That's what makes the urban legend so fascinating, but above all, beyond solution. In the modern climate we fear terrorist threats and so the maniac on the platform has dissolved into legend... but I'm sure, just like all good horror stories, there's a follow-up in the pipeline, coming to a platform near you!