Platform 9 and 3/4 To Be Disapparated 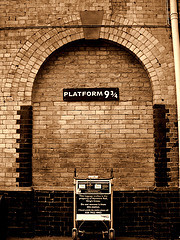 Harry Potter may have completed his seven years at school, but younger wizardlings are in for several years of service disruption on the Hogwart's Express. Platform 9 and 3/4 will be shifted later this year to allow construction work on the West side of King's Cross, according to Jon Burden the former Duty Station Manager at King's Cross, who led a tour of the area yesterday. The enchanted platform will be relocated to the front of the station, close to the ticket office, in September.

Muggles will also be affected by the redevelopment work. All facilities along the western edge of the station will close down in the Autumn, including the less-than-magic Duke of York pub. Important services, such as left luggage, will be moved to the main concourse, in turn displacing all the shops and food outlets here. Only a fragment of WH Smith will remain. Thank Dobby for St Pancras is all we can say.

These growing pains are a necessary process while Network Rail builds a new (and gorgeous) glass-domed concourse to the West, and carries out essential maintenance on the platforms. An additional siding is also being built between Platform 1 and York Way. As previously noted, this work will close Platform 1 as a thoroughfare, and lead to the dismantling of the pedestrian footbridge that spans the current platforms. And just as the Guardian moves into its new offices, swelling potential east-west pedestrian traffic in the area. This is becoming a hotly debated local issue.

We should have a gleaming new station to rival St Pancras come 2012. But there's a possible sting in the tale. Jon mentioned plans to completely rebuild Finsbury Park station around 2015. Feasibility studies recommend complete closure of the tracks into King's Cross to accomplish this. Nothing has been decided, but if this scheme goes ahead, we could be faced with total or part closure of King's Cross mainline just a few years after the new facilities open. Time to invest in broomsticks.