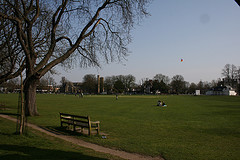 This year, when Zippos Circus came to Richmond — its 20th annual stop — it was forced to make a rather unseemly exit that apparently "caused traffic chaos and left behind a trail of destruction" that left Richmond "a muddy disgrace."

Now that reporting, while true in many ways, doesn't exactly give the circus a fair break. True, it took them 12 hours instead of the typical 2 to move off Twickenham Green, but the big top crew was dealing with some serious rain and mud that made their lorries tough to move and made a muddy mess of the Green even before they started driving about.

And may it be noted that the circus didn't just up and leave to the next town over, leaving the mess for the good people of Twickenham — no, they joined forces with council workers to help get rid of the mess and will foot the bill for the clean-up. That's some responsible circusing.

So don't be down on Zippos. Even Council leader Serge Lourie says that this was an unfortunate accident and the circus should be back next year. And the council and the Friends of Twickenham green are in talks about better protecting the Green for future events.

For now, Richmond, chin up. Look forward to the new grass that'll be growing soon enough and don't be down on Zippos. Their performers can do some incredible tricks, but they can't control the weather.

Photo of Twickenham Green before the mud courtesy of Andrew Hall's Flickrstream under a Creative Commons license.