By NeilA Last edited 170 months ago
NeilA The Saturday Strangeness 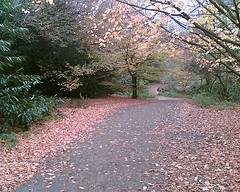 Although Hamsptead Heath's leaf-strewn pathways, patches of shadowy thicket and lillypad littered ponds are ideal habitat for an abundance of wildlife, this idyllic spot in London has had its fair share of alien invaders when it comes to peculiar out-of-place animals. In previous episodes I have spoken of seals being caught in the Vale of Heath pond in 1926, and also bizarre legends of wild pigs lumbering through the sewers of the Heath, as well as all manner of strange lizard-like creatures and also dangerous crayfish. And now for another installment of Hampstead's Horrors... this time, spiders!

It was the Evening Standard in 1994 who first covered the story of weird, hairy and fearsome forms prowling the leafy confines of the Heath – and no, Liam Gallagher's arrival wasn't until after the millennium! Reports suggested that some unidentifiable species of spider-like arachnid was roaming the area and the frenzy hit a peak on October 5th, and confirmed by Edward Milner – the Spider Recorder for the London Natural History Society – who, whilst looking at an isolated section of the Heath found more than one-hundred specimens known as tube-web spiders (no, such creatures have not crept through London's tube stations...yet!) and that such eight-legged freaks were relatives to the bird-eating tarantula!

Even more extraordinary was the fact that the spider had been thought extinct for more than a century! Milner discovered various unusual webs on the dew-damp grass one murky day in the Autumn of '94, but little did he realise the importance of such a find.

Proof also, that even in the most frequented woodlands of the capital, it is still possible for all manner of weird and wonderful creatures to hide. Just beware the next time you lay down to sun-bathe or set up a picnic!