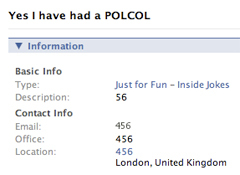 Oh, Facebook. Something about being on the site just calls for people to post inappropriate photos and divulge private information that should probably be left off the interwebs.

Even the police aren't immune to the lures of the Facebook Spill-Your-Guts Demon — 18 officers were recently reprimanded for bragging about collisions and hurting members of the public in a group called "Yes I've had a POLCOL." All we could find of the group were three lonely members and a stripped page, but it apparently included photos of mangled vehicles, mugging officers and "hair-raising anecdotes."

While it may be good to have this info out there instead of covered up — though it certainly doesn't improve our impression of the police — the Met had a PR crisis on its hands. They started investigating in January and just gave 14 officers written warnings and another four "words of advice." They have now closed the inquiry and have probably added some stronger words about Facebook to their training manuals.

Now, of course, were incredibly curious to see what was actually on that page. If you saw it, let us know.

Screen grab of all that's left of the POLCOL page