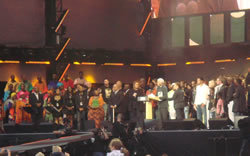 Massive "event" gigs currently seem to be in favour at the moment, with Live8, Live Earth, and last saw one of the biggest to date, and most worthy: 46664, to celebrate Nelson Mandela's 90th Birthday and also to raise awareness of his AIDS charity's work.

You've probably heard about it in the press - the whole Amy Winehouse will she turn up / won't she turn up situation, the issue over whether Nelson Mandela was even going to go himself. Then there was the impressively long list of stars attending: Gordon Brown (seen chatting to Nelson Mandela through Simple Minds' frankly tedious performance - we would have done too, if we could have without shouting at each other), Will Smith, Quincy Jones and Lewis Hamilton actually turned up, whilst others could only be bothered to send a video (including Victoria Beckham, who got one of the most savage boo-ings known).

In amongst the notable guests was some of today's (and yesterday's) best (and worst) performers, culminating in a show-stopping five song set from Queen that showed they still have what it takes. We also saw amazing performances from Amy Winehouse (who still has the power to wow with her voice after all she's been through recently), Will Smith and Zucchero. A lot of artists were ones that we weren't familar with, however certainly opened our eyes up and featured a lot more variety musically than the rather biased Live8 and Live Earth events.

After the jump: a blow by blow account of the evening

17:30: Finally we arrive at Hyde Park, slightly peeved at paying almost £14 for a bacon bap, a burger, some chips and two bottles of water between two of us. 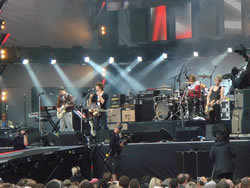 18:25: Starting things off was the irritating Christian O'Connell and June Sarpong, who introduced Jivan Gasparyan, who played a rather slow song to kick things off.

18:35: Will Smith and Jada Pinkett Smith are the main hosts of the evening, both looking stunning, Will in an all white suit, and Jada in an amazing dress. They introduce Razorlight, who performed "Fall to Pieces" and "Don't go back to Dalston", and thankfully Johnny Borrell wasn't wearing his tight white suit again. Throwing a reef into the crowd during "Dalston", he made one of the first comments about the elections in Zimbabwe that were happening yesterday.

18:50: The cast of Into the Hoods (currently playing at the Novello Theatre) do an amazing dance to Massive Attack's "Teardrop".

19:00: Quincy Jones introduces Leona Lewis who does a great rendition of Bleeding Love and Better in Time, though seemed to look a bit tired and nervous (mind you, wouldn't you if you're doing her PR schedule?)

19:30: Lewis Hamilton introduces Sugababes after a heartfelt speech about what Mandela means to him.

19:40: Will Smith's back. Performs Switch and the theme to the Prince of Bel-Air, which received one of the loudest cheers of the night and the first mass sing-along. He looks right at home, and clearly loves us all.

19:45: Annie Lennox with a choir sings "We Are Together" acapella after a moving talk about a young girl she met when in South Africa who's mum had died of AIDS. It was the first time the cause of the night hit home, and everyone was stunned into silence. It made us all realise the good work charities like 46664 do, helping people in third world countries who are coming to terms with the AIDS / HIV epidemic.

19:55: Peter Gabriel introduces Emmanuel Jal, a surprise guest and one of the stronger ones.

20:05: Jamelia plays Superstar, Thank You, and a pretty strong cover of George Michael's "As". How comes she gets three songs, but Annie Lennox only one? Not exactly fair we think.

20:20: Geri Halliwell painfully introduces Johnny Clegg. Quite honestly, we were amazed that she didn't get booed as much as Victoria Beckham.

20:30: Will Smith introduces Nelson Mandela to the stage. The biggest cheer greeted the man, and then and eery silence as we all hung on every word he said. "Where there is poverty and sickness, where there is oppression, please keep supporting our 46664 campaign." He looks remarkably well for a 90 year old, though does need a bit of help on and off stage.

20:45: June Sarpong introduces Eddy Grant, who sings "Give Me Hope Johanna", and gets one of the biggest mass sing-alongs. We even have bouncing balls on screen to remind us of the words, like sing-along Disney but with Eddy Grant. 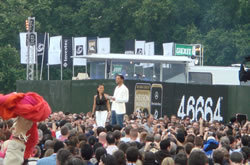 21:00: June Sarpong has to fill, and unable to think of what to do hands the mike to some random guy in the audience to sing "Happy Birthday". Yes, it's like watching Ricky Gervais at Live Earth all over again: painful. Then she introduces Simple Minds, who frankly don't seem to be on top of their game. We see Nelson Mandela having a little chat with Gordon Brown in Nelson's (rather plush) suite.

21:15: Stephen Fry provides a hilarious (if possibly overly-sarcastic) introduction for Andrea Corr and Brian May perform "Is this the world we live in?" (we think - things start getting a bit hazy at this point)

21:25: Amy Winehouse arrives. No filling needed from June Sarpong, Amy turns up on time and rattles through "Rehab" and "Valerie".She looked positively bored during Rehab, and kept on fiddling with her skirt, leading us to question: does she have thrush? 12% of the population think she has headlice, so whatever next? She looks rather vacant throughout both songs, but does manage to teeter down the run way at scarily high speed in her heels whilst doing Valerie.

21:50: Josh Groben with the Soweto Gospel Choir, followed by Amaral.

22:05: Bono and Edge from U2 call for Mandela's birthday to be a national birthday, and perform a special version of "Happy Birthday", though it is just on video rather than live. Thankfully, otherwise Bono would have probably gone into full blown preacher mode.

22:15: Queen come out to round things up, opening with "One Vision" and "The Show Must Go On", before moving onto their heavy hitters: "We Will Rock You" and "We Are The Champions". Though they have Paul Rodgers instead of Freddie, they still sound amazing, and the sight of almost 46662 pairs of hands behind us was quite a sight to behold. They rounded off with Paul Rodgers' old band Free's hit "All Right Now", much to the delight of everyone. Dancing in the aisles? No, the place went pretty crazy: dads and sons, happy couples, and groups of friends having the time of their lives. We won't see this again for a while (well, until the next huge charity concert springs up, probably about this time next summer).

22:30: Amy Winehouse has come back out to join Jerry Dammers and Queen in singing the Specials' song "Free Nelson Mandela" - Dammers wrote the song originally. Everyone who has performed throughout the show is also now back on stage, for the usual show closing finale. Amy seems to forget the words a few times, but nobody really notices.

22:40: It's over, all over, another amazing evening in Hyde Park. Queen stole the show without a doubt, but the surprises along the way made it all the better. As we walk out, everyone's singing in high spirits, with various renditions of "Bohemian Rhapsody" and "Free Nelson Mandela" (of varying quality) being sung...An amazing concert for an amazing cause.

Photos are from the authors own (shockingly awful) photos, and are of Nelson Mandela's speech, Razorlight and Will Smith and Jada Pinkett Smith