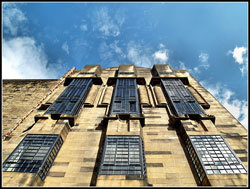 London to Scotland in under three hours? Well you could go Ryanair and enjoy the bum-rush for seats at Stansted, the teeth-gritting discomfort, and the faint but palpable sense of guilt at your carbon footprint. Or you could jump in Jeremy Clarkson's motor and see if he can repeat his 186mph Limehouse Link dash up the M6.

However, the future may herald another way. According to "secret" talks between the UK and Scottish governments, a plan is underfoot to build an entirely new train line for the exclusive use of a Eurostar-style bullet train, hurtling between London and Glasgow at 220mph for a journey time of little more than three hours. The proposed "High Speed Two" would be the country's second high-speed rail line, after the newly opened cross-channel link from St. Pancras.

Now the bad part: any such project would take a decade to realise, and cost somewhere in the region of £9bn and £12bn for a line down either the east or west coast, or else, £30bn for both of them, although the latter could attract upwards of £60bn for the economy. Environmental campaigners are urging that the proposal move ahead, claiming long-term benefits would soon outweigh the initial investment. Niggling questions remain, however, about just where the funding would come from.

Gordon Brown is apparently under pressure from MPs to label the idea a "grand project", thus burnishing his own credentials as a key supporter of the Union. However, with Scottish independence a distinct prospect and a buzzing Tory government waiting in the wings, it's not inconceivable to imagine that, a decade from now, the Prime Minister of England, David Cameron, would need to remember his passport when taking the train to visit his Holyrood counterpart.