Concern Over Gay 'Wedding,' but the Flowers Were Amazing

By KizzieFK Last edited 139 months ago
KizzieFK Concern Over Gay 'Wedding,' but the Flowers Were Amazing 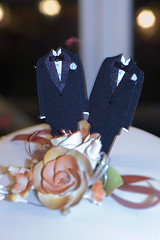 The Anglicans are all in a tizzy this week because of two gay priests who had a marriage-style ceremony at the church of St Bartholomew the Great on May 31. The couple were already civil partners and had hundreds of guests at the event to celebrate their union, which is now coming under fire by conservative Anglicans.

Though the Archbishop of Canterbury and the Archbishop of York have expressed "great concern" and have launched an investigation into the event, the priestly couple has at least some support from within the church.

The vicar who performed the ceremony, Dr Martin Dudley — who, by the way, notes that he's "robustly heterosexual" (way to distance yourself from your gay brethren) — says he's sticking by the pair and his decision to bless them. He also stressed that the ceremony wasn't meant to provoke traditionalists or make a statement, but was performed out of "pastoral care" for the couple and was a "joyful celebration."

The religious romantic also enjoyed the finer details of the ceremony, like the "amazing flowers" and "fabulous music." (Um, vicar, we still believe you, but we may have to downgrade you from "robust.") Good to hear the couple of the cloth didn't neglect any of the finer details. Now let's just hope this investigation leaves them with a happily-ever-after ending.

Image courtesy of Donnay's Flickrstream under a Creative Commons license.