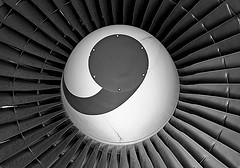 When it comes to cons, John Wilmot, a City barrister, didn't just go big, he went jumbo. He attempted to get £17.5 million in VAT repayments by claiming he bought and sold four Boeing 747 engines for £100 million. What a barrister would be doing with a set of jumbo jet engines, we're not sure.

If the story sounded suspicious enough already, it gets weirder. Wilmot apparently drew up some fake documents about a "business sideline" and when questioned by Customs and Revenue about this high-priced business deal, said he sent the engines "to a man he met at a garden party, care of Basra Airport."

Oh, yes, we always make £100 million sales at garden parties while eating finger sandwiches and canapes. Then we, too, send our goods to Iraq, where you probably won't want to send anyone to look for them — we hear it can be pretty dangerous over there. Can we claim £17.5 million too?

This story never sounded like it had even a toehold in reality. And that's the problem: It seems Wilmot made up the whole thing.

The taxman was on to him, too, and before any refund check was sent his way he was arrested. Wilmot is still denying that he tried to cheat the public out of tax revenue and his case has yet to be decided. Now where are those jet engines when you really need them?

Photo of a 747 engine courtesy of Jojo Cence's Flickrstream under a Creative Commons license.