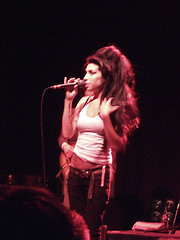 Well, it seems our fave ne'er-do-well Londoner may have a case of tuberculosis. She was taken to the London Clinic on Monday after fainting at home and is said to be suffering from a chest infection, dramatic weight loss and lack of appetite. She's also coughing up blood (let us just repeat: ew!)

Though her symptoms may all be traced to drug use, which we hear can have some nasty side effects, the fact that she's been coughing up blood may point to TB, says the chair of the British Lung Foundation. Um, we could have told you what coughing up blood meant without an expert opinion — the blood-spotted hankie of doom is only the most common indication in period movies that someone has the dreaded consumption and will die imminently. We've seen Moulin Rouge!

Thankfully, in this day and age TB is treatable and Ames is currently getting care for whatever yet-to-be-publicly-diagnosed illness she has. Her rep says she hopes to be well in time to sing for Nelson Mandela's birthday and at Glastonbury, both next weekend, though her doctors will be the ones to give her the OK or tell her to stay home and rest.