To Greece on Grease 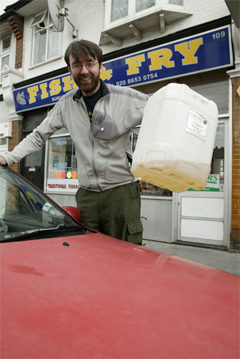 On the self-titled first "fat-finding" mission across Europe, Londoner Andy Pag will lead a team of 30 cars — powered by chip fat and other cooking oils — to Greece. We can only think he chose the destination for the grease-Greece puns.

To add an extra element of challenge, they'll be heading out from a 1950's style greasy spoon in south London with a full tank of English breakfast runoff, but will be scrounging from restaurants during the rest of their two-week journey. If restaurateurs aren't being generous with the leftovers from their deep fryers, though, teams will be allowed to buy biodiesel or pick up cooking oil from a market. If all else fails, Andy says, "I'm sure we'll be pushing the car a fair bit anyway!"

The real point of the trip — other than to "have a bit of a laugh" — is to find out if using waste vegetable oil is practical for long distances. The group plans to head out on August 16 and take a route that'll go through Germany, Austria and Italy, among other countries. Anyone can sign up, and entrance costs £99. The bio-fuel brigade will also be raising money for the British Heart Foundation.

Photo courtesy of Andy Pag and Grease to Greece.