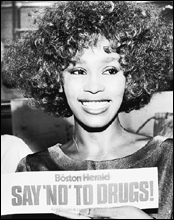 Celebrities Whitney "The Voice" Houston and David Furnish were out last night to attend a Children’s Charity Ball at Battersea Park. Whitney sang at the event, raising money for the Caudwell Charity and receiving rave reviews. The star of The Bodyguard is attempting a comeback, with a new album due later this year. Elton John’s partner, David Furnish, was particularly rapt by Whitney’s hour long show. Never one to namedrop, or recount decade-old anecdotes, Furnish said:

I have seen Whitney sing live in New York about 10 years ago or 11 years ago at Sting and Trudie's Rainforest Party and she was fantastic.

Furnish also maintained it was wrong to think of Whitney’s return as a career relaunch:

I think relaunch is the wrong word, I think when you have someone like Whitney who is spectacularly talented, I think they can take as much time off as they want and if they get the right songs they can come back and sell lots of records.

That’s 5 years in Whitney’s case, if you count back to her last studio album, which in anyone’s eyes other than David Furnish’s makes for some sabbatical. The chances of former husband Bobby Brown re-enacting hit "Two Can Play That Game" by joining the legion of 80's popstars refilling their empty coffers and returning to the stage, also appear likely. Brown is scheduled to tour with his old boyband New Edition later this year.