By M@ Last edited 177 months ago
M@ Londonist's Back Passage 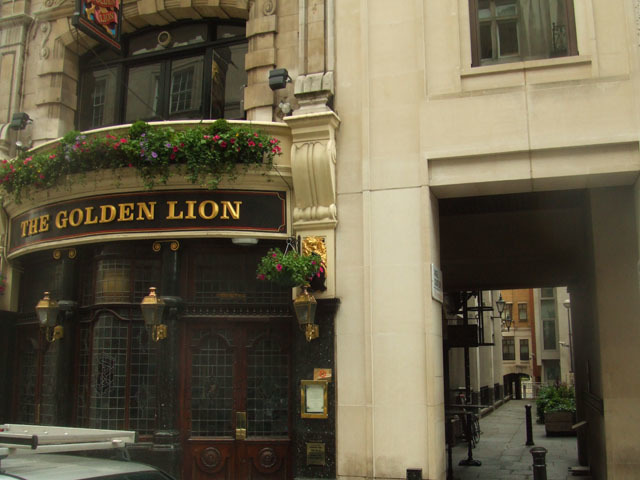 Where? St James area, linking King Street and Pall Mall. This one runs parallel to Crown Passage, a former star of Londonist's Back Passage.

What? Clean, wholesome alley in a clean, wholesome area. Angel Court cuts between toff hangouts and office buildings. A plaque on the western wall commemorates St James's Theatre, which closed in 1957 despite fierce protests from Vivien Leigh and Sir Laurence Olivier. Bas-relief panels at either end of the passage depict actors connected with the theatre, including Viv and Lauro.

The Golden Lion provides liquid refreshment, and the ghost of a servant who was kicked to death in 1823. This small Victorian boozer can get busy with suits. The upstairs room, once the hangout of Oscar Wilde, is often quieter and has a small balcony for the crafty fag (no pun intended).

Old Bailey records report a fatal stabbing in the alley on 7 December 1692. One Richard Towers was put through with a rapier after accusing defendant 'J-K' of lewd conduct in the alley.

Why use? Avoid the hoi polloi around St James Palace and use this shortcut to move between your tailor and gentlemens' club of choice.

Enter our back passage: As a special bonus, we've filmed this alley so you can explore the passage from the comfort of your own laptop. As you'll see, we didn't encounter any divine beings in Angel Court, but we did pass a street sweeper who appeared from a light at the end of the tunnel. The protest you'll hear on Pall Mall was a demo for Darfur outside St James Palace.

View previous installments, and a map of all our back passages.