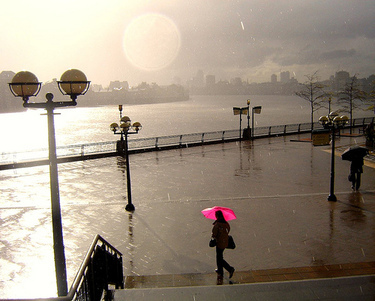 Sure, you’re hungover, quite possibly bloated, and probably rather haggard, but the fun of the Bank Holiday weekend doesn’t have to stop there! We’ve got a great line-up of activities all week long to fuel you through your blissfully short four-day workweek.

Monday: Forecast says rain on Bank Holiday Monday, so why not sleep in (as though that bears suggestion), laze around all day, and save your energy for the evening? Head to the ICA for Nought to Sixty, a six-month programme featuring 60 emerging British solo projects. From 7.30 pm, £2, £1.50 concessions.Tuesday: Today is Secret Cinema day, a monthly event that changes how and where you view films. The film and its screening location are kept secret until the day of, where you could find yourself watching a film on a rooftop, in a park, or in a derelict theatre. Sounds pretty rad to us. Sign up here. Also tonight, check out Offline Club's latest Variety Night in Brixton, featuring Chicago Improv Olympic-trained comedian Pete Shukoff, plus one of the “best hurdy-gurdy players in Britain” (our heads swim with the possibilities), live poetry and cabaret acts. From 7.30, at Prince Albert on 418 Coldharbour Lane, Brixton. Free (and cheap drinks!). Wednesday:: Get your Bowie on: tonight marks the last Nag Nag Nag, an exceedingly fun club night known for kicking off the ambisexual electro scene back in 2002. Beware devastatingly cute boys in silver eye shadow and Crystal Castles t-shirts, that’s all we’re saying. Ghetto club in Soho, £7. Thursday: Knitting + alcohol = craft, modernised. The two-year old I Knit London group is a popular twice-weekly knitting club that alternates between meeting in pubs and the I Knit London shop. This ain’t your Nan’s knitting group, either: from the looks of it, it’s a fun group of young’ins hip to the craft revolution. Tonight’s meeting is at the I Knit London shop (liquor license-ready, natch) at 108 Lower Marsh St. in Waterloo, from 6 pm. Free. Friday: It’s the weekend, which means conspicuous consumption is nigh, and it’s dangerously close to pay-day, which means you could seriously use a sale. Prayers: answered. Head to the 20th Century Theatre on Westbourne Grove for the used-to-be Secret Sample Sale, with up to 80 per cent off clothing by top designers including Prada, Tsubi, Cacharel, and Miu Miu. Don’t say we never did anything for you. Measley one pound admission fee bags you access to a stockpile of discounted designer goods. Saturday: And for the oddest and most intriguing of the week’s cash-strapped events on offer, why not give the Bum Bum Train a go? Perhaps as bizarre as it sounds, a 40-person strong Shoreditch art collective creates a unique experience by pushing each individual visitor in a wheelchair through a freakishly entertaining and chaotic series of oddities, performances, and situations. Free. Sunday:Two reasons to sample the free musical performance on offer in North Finchley this afternoon: 1) the Artsdepot venue is located in a place called Tally-Ho Corner, which is almost too awesome to comprehend, and acoustic guitarist Michael Berk’s atmospheric music is described as a melding of heavy metal, Celtic, and flamenco. Huh? Best to see for yourself. Free, 5 Nether Street, Tally Ho Corner (tee hee), 1-3 pm. Or, you could stay in and recover from your no doubt debaucherous Bank Holiday weekend. You can think of it as DIY London On The Cheap: a week of greasy food and paracetamol.