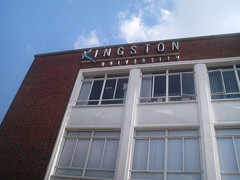 Naughty naughty, Kingston University: an audiotape recording of faculty members at the southwest London institution telling students to lie in their responses to a quality of teaching survey has emerged.

The National Student Survey is widely seen as the best measure of student satisfaction, and the results affect university league tables. Looking for a quick-fix to their lowly position, Kingston staffers were recorded telling students that they needed to embellish their responses as, otherwise, "nobody is going to want to employ you", because the degrees would be viewed as "shit" by potential employers. One academic laid it out thus:

this is going to sound incredibly biased ... if you think something was a 4, my encouragement would be, give it a 5

The university describes this as an "isolated" incident, although, judging by the comments on the BBC page, Kingston is hardly the only university to try this trick. Having such an inadequate and corruptible system for ranking colleges, in a competitive landscape where higher education is a business model like any other, competing for the finest students, it's of little surprise that staff are under pressure to improve their margins.

Listen to the recording here