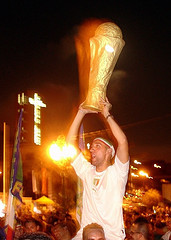 "Everything is better with a bit of humour." So said Roberto Donadoni, as Italian football manager the incumbent of one of the most pressurised posts in the world, last Monday night in a special seminar organised by Birkbeck College Sport Business Centre. A healthy dose of self-deprecation is a useful asset in a job where your public always let you know who you're working for and what you should be doing:

"This happened just about half-an-hour ago! So my job is already done! All I have to do is turn up to the European Championships. In Italy in particular it's inevitable that people will give you all kinds of advice and you end up with fifteen strikers or something like that. This is good! I enjoy receiving advice, especially from the media, but you should also tell me who I don't actually have to play!"

Donadoni, who took over in the immediate aftermath of Italy's delirious world cup victory celebrations two years ago, was introduced to an audience of students, media and the general public by UCL lecturer and author on Italian football, John Foot, who described Donadoni as "facing the gargantuan task of lifting a team who had won everything there was to win." Certainly a job description that might lead any applicant to want his head examined, which is precisely what researchers at the Birkbeck/UCL Neuroimaging Centre had done for him earlier in the day as they looked for clues to what makes a great sporting mind tick.

He certainly must have something about him as, having resisted the temptation to complacency, Italy will be crossing over the Alps for this summer's European Championships whereas the arrival of his countryman Fabio Capello in the England hot seat came only after we'd failed to join the party ourselves. When asked about his reaction to former Arsenal midfielder David Bentley's refusal to play for England's Under 21s last summer after complaining of fatigue he showed his success allies steel to style:

I believe it's very important to have a good relationship with players, however in the frame of common respect. I believe whoever refuses, or even uses the word "refuse", is doing something wrong. Although we're all entitled to our own opinions, we still have a role to fulfil and that of a player is to play. It would be the same as me refusing to come to England for a match tomorrow just because I could lose that match - it wouldn't be the most appropriate thing to do.

In expressing admiration for the understated but imposing style of captaincy he experienced at Milan under Franco Baresi and the cerebral managerial approach offered by early mentor and predecessor in the national coaching job Arrigo Sacchi, Donadoni further demonstrated that discipline and firmness of purpose are central to his managerial philosophy, though he is certainly no defensive reactionary. He is in favour of the use of goal-line detection technology, though not persuaded of the merits of instant video replays and, far from being fearful in facing the acid test of his management in the summer, he hopes his team will clearly display a joy in the playing of their football.

He knows, however, that the media will be quick to judge him and, though relaxed about the situation, he would not be drawn on his future after the tournament. He seems happy to stay where he is, if the Italian public, very respectful of the wisdom that comes with age, can bring themselves to accept his leadership at the tender age of 42. He claimed he had let his hair go grey to see if that helped. He also expressed his admiration for the spirit embodied in the English game and the technical improvements it has demonstrated in recent years. Although managers tend to turn their thoughts to international coaching as a finale to their careers Donadoni, like his playing contemporaries Jurgen Klinsmann and Marco Van Basten, is showing that nowadays it can be just the beginning.