Dig for Victory and a Sustainable Future 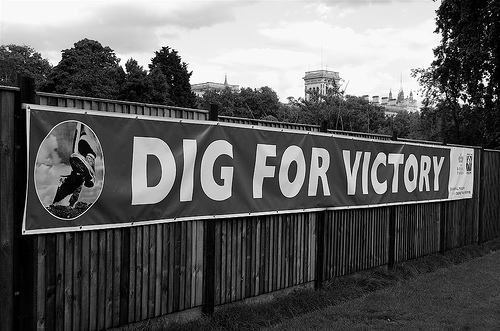 St. James Park has a new summer attraction: Next to the already excellent swans, pelicans, geese and flower gardens, there's a new patch of green — an allotment garden in the style of those planted during the Second World War.

Planted in conjunction with an exhibit at The Churchill Museum and Cabinet War Rooms called "Make do and mend, the War on Waste," which teaches about clothes rationing during the war, the garden teaches about recycling, wildlife conservation and the importance of fresh, healthy food. It also seems to be a great excuse to bring out some vintage wartime posters.

It's the second year the park and the museum have teamed up to plant — there was a Dig for Victory garden last year — and they'll be getting schools and other groups involved in activities in the garden and War Rooms, which should help teach kids that their (Lil) Green Patch on Facebook has some basis in reality.

The vegetable garden will be growing until September 30. And we want to know — who gets to eat that excellent veggie feast when it's all harvested?