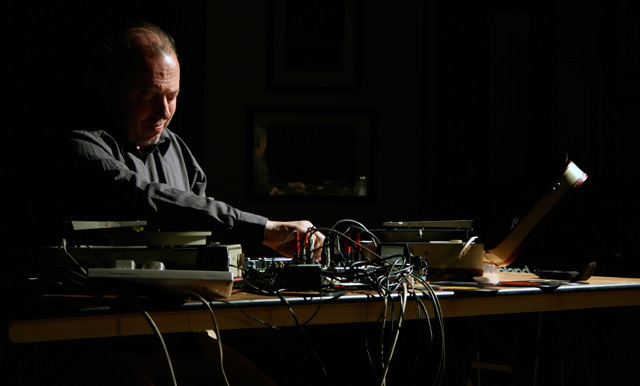 As we walked across Lambeth Bridge towards the Museum of Garden History on Thurdsay evening, we were immediately reminded us of how much we enjoyed the first Atmospheres festival. It was on that bridge in October where we started it with a field recording workshop led by Chris Watson. With the old St Mary-at-Lambeth church in close sight, it was tempting to stop for a quick recording session, but we were too afraid of missing any of the acts on offer that night.

Having never heard Marcus Davidson before, we were quite looking forward to his opening set. Anticipation can often lead to disappointment, but in this case even our already high hopes were exceeded. Playing an entire set on an effects-treated Roland synthesizer generated a sound thicker than most laptop performances we've heard. Davidson's colliding organ notes layered with bright, atonal sweeps perfectly complemented the high church ceilings, so as soon as he was finished we couldn't wait for his collaboration with Philip Jeck to begin.

A master at manipulating vinyl, Jeck began their session with a warm crackle of fuzz. Gently, Davidson added a soft pad of airy synth with bits of melody floating over the top. With each musician careful not to overtake the other, their duo proved a natural extension of Davidson's set, making us eager to hear Jeck on his own.

Former Loop frontman and Main mastermind Robert Hampson followed with a series of works on laptop. Prolonged, rather harsh drones were interspersed with vocal chatter, noise bursts and crackle. Whilst sonically interesting and extremely well-composed, as a live performance it suffered alongside the brilliant presentations of Jeck and Davidson. The frequent gaps between pieces made for an interruptive experience, when we know that with more continuity Hampson could have held us riveted for the duration. Nevertheless it was a fantastic opportunity to hear the latest sounds from someone whom we've been a fan of for so long.

Soon after Robert Hampson finished, Philip Jeck returned to close the night with a solo session on two turntables and effects. The phrase "two turntables" immediate evokes images of a dance DJ's Technics 1200s, however these were a far cry from such precision engineering. Jeck's turntables looked, at least from a distance, absolutely knackered. Well-worn and much-loved, these record players were no longer machines of faithful reproduction, but now unique instruments in their own right.

The imperfections of the machine and the media it was designed to play provided Jeck with ample tools in his aural arsenal. A dodgy needle, a loose and warbly old belt and some scratched records, no matter how you cut it, are bound to yield a wide range of interesting sounds. At the centre of it all, Jeck skillfully leveraged his intent against the accidental sounds his machines wanted to make. The result was a haze of warmth and sparkle, with even the harshest moments having their edges sleepily dampened.

Jeck's music mirrors everything we've come to associate with vinyl, from its reassuringly cozy surface noise to the personal nature of its in-home consumption. You can't listen to a vinyl LP with an iPod on the bus and now we're not sure if we can separate Jeck's unconventional blur between DJ and producer from the surroundings of the Museum of Garden History. He made the old church feel a bit like home, which we really rather appreciate, because we like it there.

Image of Philip Jeck at Atmospheres 2 taken from the author's Flickr photostream.