Angel Of The South Shortlist Announced 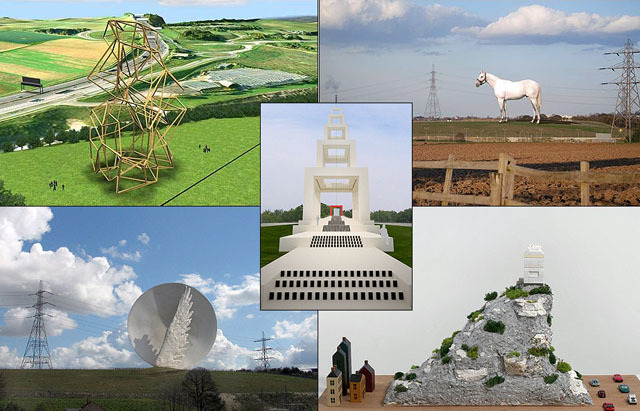 The five leading designs for an Angel of the South have been revealed. The winner will be built in Ebbsfleet, Kent in 2010, as the South's answer to Antony Gormley's Angel of the North.

Bottom right: Rachel Whiteread's effort seems calculated to generate the most ire. A heap of rubble is topped with her trademark cast of a house interior. Predicted tabloid nickname: The Nimby magnet.

Centre: Like a Lutyens war memorial, Daniel Buren proposes a white tower of cubes, with a laser beam punching the skies from the base. Predicted tabloid nickname: The death ray.

So, a very mixed bag. We'd recommend viewing models of the entries, as it's always difficult to get a sense of a sculptor's vision from a flat image. And you can do just this by visiting an exhibition at Bluewater from 7 May. The winner will be selected by committee later this year.