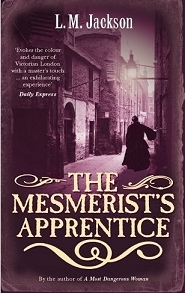 Any true London lover will, by now, have found the Victorian London web site. This virtual portemanteau of 19th Century source material is compiled by Lee Jackson, whom Londonist interviewed a few years back.

Lee dispenses facts like a lashing from Wackford Squeers. In the space of a pint, we cover Victorian rollerskating rinks, ten-pin bowling alleys and 19th Century cocktail bars. Those prescient Victorians even designed a 'portaloo' for the Great Exhibition, and Big Brother-style observation rooms where curious Londoners could study Oriental families.

One Victorian craze that didn't stick around was surgical mesmerism, the subject of the book. In the days before effective anaesthetics, medics and patients alike were open to what we would today think of as quackery. There are many documented cases of doctors using hypnotic techniques to treat patients, and remove the pains of birth. Even Dickens had a go. Eventually, the practice fell out of favour but, says Jackson, "had history panned out slightly differently we might have a large mesmeric hospital in Queen Square instead of a homeopathy clinic."

The novel is expertly paced, and carefully plotted, like a SlimFast Wilkie Collins passed through the elementary canal of Conan-Doyle. We ask about more modern influences. Lee claims not to read any of his peers in the crowded VicLit genre, with the exception of Sarah Waters, whose Fingersmith he rates highly.

The real joy of The Mesmerist's Apprentice is the precise references to London's streets and alleys, particularly in the Holborn area, many of which are no longer there. We found ourselves regularly referring to old maps to follow a character across the rooftops.

If you're after a pageturner with a real sense of place and pace, prepare to be mesmerised.

The Mesmerist's Apprentice by L. M. Jackson is out now, published by William Heinemann.