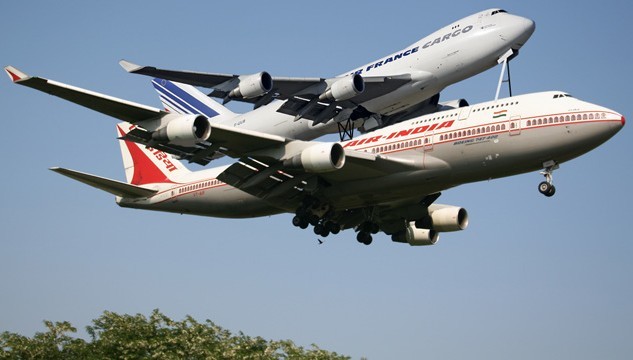 Note for confused folk stumbling across this article...it's an old April Fool's gag from 2008.

With the situation showing little sign of improvement at the brand new T5, London's aviation bosses are keen to turn the public's attention to plans for dealing with the real elephant in the Heathrow departure lounge - the traffic congestion caused by still only having two runways. Yesterday saw the first test of a solution that could be in commercial use as early as next year. The bold plan seeks to double potential runway capacity by using long-haul aircraft to carry smaller planes "piggy-back" style out of West London. The smaller craft later detaches in mid-air and glides down to its destination, a technique pioneered by NASA for its space shuttle tests thirty years ago, but only recently sanctioned for civilian operations.

Auspiciously at 7:47am local time an Air India jumbo set off down Heathrow's northern runway bound for Digha in Western Bengal. Strapped to its back was an Air France freighter on its way to Monaco. Both planes had experienced test crews aboard plus a number of personnel from interested parties, including freelance aircraft technician Noah Way from Hoxton who was an observer on the Monte Carlo flight. Two hours later, over the Mediterranean Sea, he witnessed the historic detachment:

All the way over the French pilots had been pulling our legs about how rough it would be, but when it came to it there was a bit of a 'clunk' and then just a wonderfully quiet and serene coast down into Monaco. I think passengers are going to love it.

Public relations officer Jo Kissoniou was quick to point out that the solution also has strong green credentials:

The short-haul flight gliding down to its destination will lead to significant savings in greenhouse gas emissions from burning aviation fuel.

Groups concerned about noise pollution have given the proposals a cautious welcome so long as they are accompanied by an overall reduction in powered take-offs, but government representatives are believed to be locked in meetings with aviation officials over whether or not airport taxes can be levied on a plane that is not becoming airborne under its own propulsion. With more tests planned in the coming weeks to destinations such as Kai Tak airport in Hong Kong and Nicosia International in Cyprus participating airlines are looking forward to a welcome reduction in their April fuel bills.