LEZ Is A Nice Little Earner 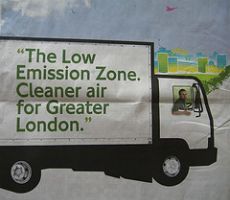 It may be pissing off our lorry drivers, but as well as improving air quality and reducing carbon emissions, Ken’s Low Emission Zone is also stoking the capital’s coffers. With nearly 1 in 20 vehicles affected by the emission standards initiative falling foul of the legal limits, cash tills rang to the tune of £500,000 this month from fines dished out.

Anyone imagining TfL execs bathing in ball pools of cash, or luxuriating in a DuckTales-style vault of pound coins, can think again though, the scheme cost £57 million to set up and will take £10.7m a year to run. According to the government, this is chump change compared with the long-term improvements in health the congestion charge’s baby sister is expected to reap, with the benefits (somehow) being calculated to be worth £170m-£670m over seven years.

Whether in the future the initiative will be expanded to include the highest polluting cars is still unclear, but emissions standards are next scheduled to rise further in 2012.