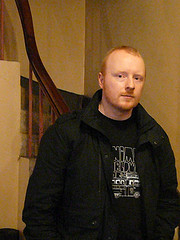 Before his gig at Islington's Union Chapel, we talked to cult indie hero Malcolm Middleton, formerly of the greatly missed Arab Strap, about his new solo album, Madonna and a failed bid for the Christmas number 1.

Can you tell us about your new album, "Sleight of Heart"?

It was originally supposed to be a mini EP, like a four track acoustic album with two songs, "Blue Plastic Bags" and "Love Comes in Waves" and two cover versions. It kind of blew up from there, and I did three cover versions and more songs because those songs I wrote last summer, but I had songs like "Week Off" which were written at the same time as [2005 album] "Into The Woods" but I tried to record them but I wasn't happy with them. I liked the songs but I didn't know how to produce them, so I let go and I just relaxed and did something light hearted and acoustic.  The idea started growing from an EP into an album. And it was just to do something that was removed from [2007 album] "A Brighter Beat" and wasn't like a big production album, just go back to basics.

How did you choose the cover versions?

It's not something I was really comfy with. I don't have a repertoire of doing other people's songs or anything.  Madonna was obvious as it was the first album I bought, and I like the song "Stay".  She kind of beat me to the happy song with melancholy lyrics kind of thing, a poppy tune with some depressing lyrics about the real shit.  King Creosote, I love "Marguerita Red".  I was a bit more precious about that so I didn't really want to ruin it so that's why I made it into something different.  Jackson C. Frank, I still don't know if there's any benefit of me doing one of his songs.  I like it but I'm not sure it will turn people to go and buy his music if they've not heard of him.  They probably won't care, but hopefully they will.  The one I left out was "Set You Free" by N-Trance.  I used to do that as well at gigs, but it's a bit too obvious.

How do you feel about the success of your bid for Christmas Number one with "We're All Going To Die"?

That's a complete failure!  Well, it's good in that I've not had a top 40 single before.  It's easier to look back now with a bit of clarity and hindsight.  It was just a laugh.  I'm sure a lot of people who buy X-Factor must have hated me for trying to ruin their Christmas, but it's in good taste and I think I came off quite lightly.  If it became anymore successful I could have come away the one hit wonder Christmas guy. But I think we'll find out next Christmas when I release it again and see what happens.

Were you surprised at the backing it got, such as from Radio 1's Colin Murray?

It was pretty much him and William Hill that were responsible for it.  He got behind it and got other people talking about it on their shows.  William Hill pulled the wool over everyone's eyes by reducing the odds significantly.  They were just playing people, I think, so they were going "Why's this suddenly sixth favourite?", when there was no chance of it ever being number one.  I don't mind being the sort of figurehead for that campaign for a couple of weeks, but I did do a lot of things I would never do again, like sitting in a basement, dressed up as Santa Claus, doing interview after interview with mobile phone companies.

Have you noticed much of an impact on your career?

I've have had a few people that have come up to me and said they'd not heard of me before the single and they're buying the old albums, so that's really good.  I'd probably have just shat myself if it had all kicked off and everyone was just buying my albums.  I don't think I would have liked it, in fact I know I wouldn't have as the little whiff of success I did smell, it made me really nervous.  I'd probably become an idiot, and not enjoy it. 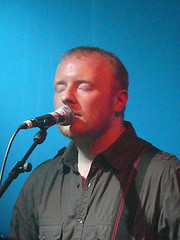 What inspires your lyrics, are they all autobiographical?

Yeah.  It always amazes me when people ask that, I mean who would make up this shit!  I've never been one to write stories, or songs about imaginary people just to get a point across, so all notes and I write stuff down in moments of despair or just that way when your bubble bursts and your world and reality comes through, and that reality will be either optimistic or pessimistic. You've got the bubble around you that you live in every day, but you can see through a crack and write about what's going on.  It's basically just day to day stuff, just trying to be a better person, try not to make mess of my life, and trying convey how I feel so that other people can relate to it.  If they relate to it, it makes me feel better, because they feel the same as me.  And they feel better because I feel the same as them.  It's like a nice hug, but you could call it a slight ego rubbing as well

Didn't your second album, "Into The Woods" come from trying to write some music for a children's TV programme?

A friend knew some people at Fox Kids Network or something.  I wasn't even sure I was going to write a second solo album, and they asked if  I could do some music, and I said yeah, so that's where songs like "No Modest Bear" and "Happy Medium" were from, just like two dimensional, happy kids songs but then the song "Happy Medium", had this really bunch of depressing lyrics like "Woke up this morning, realise I hate myself", and it all seemed hilarious that they all fitted on top of this really happy tune, so that kind of kicked off that happy, upbeat music with lyrics that are a bit down.

You're always being labelled as being miserable.  Do you think people miss the humour in your music?

Not really, the humour's not the first thing on display, it's the in-joke if you get where I'm coming from.  I don't have a problem with it because I am miserable sometimes, and the fact is, if I'm only going to put one part of myself on display, I can't really complain. It's an easy thing to say as a lot of my music is melancholic and downbeat, but if you listen to other people's albums, I don't recall everyone suddenly being happy and I'm like the miserable one on the other side of the coin.  Most pop songs are about someone leaving you and wanting them back.

Do you think perhaps its unfair then?

I don't think it's unfair, I think its slight laziness.  If you look harder, there's more to it, but I'm not going to be offended by it.  Arab Strap were called that for years, and we were slightly confused by it, but I think it's just a BPM thing, the songs are slow and in a minor key, that sort of thing

There's a lot references to your songs being "shit", such as "Break My Heart" (I don't want to sing these shit songs anymore) and"Devil and The Angel" (I'll never be good at anything... and my songs are pish).  Is that a genuine sign of self doubt?

I think that's an obvious sign of self doubt, yeah., but also "Devil and The Angel" is the first song I wrote, years after being Arab Strap not writing songs and my confidence severely knocked about song writing.  I was just having a laugh, but the fact is when I wrote that song, I knew it was good and I liked it, so that kind of help things as well.  I actually gave that song to Aiden [Moffat] for the "Philophobia" album, but he didn't like it, and it made me not want to do anything for a long time.  "Break My heart" is just a joke, like I'd rather not be heartbroken and not sing any songs, than be heartbroken all the time and write lots of heartbreak songs.  I think some of my songs are shit.  I like them one day, then hate them the next, but I'm quite self critical so I can see through the lies in the song and see they're rubbish.

Your solo work is very different to Arab Strap, it's a lot more poppier.  Has there always been that side to you?

If you speed up the Arab Strap records I'm sure you'll find the pop! I grew up listening to pop until I was 14, when I discovered heavy metal and then the descent began.  I think the main difference between myself and Aiden's stuff is that Aiden names names and specifics, but I don't do that, I try to be more generic, where as he talks more about exactly what happened.

Did you find that could sometimes be a problem?

Back in the day we had a couple of lawsuits threatened and stuff by people living in Falkirk.  I think on the later albums he stopped mentioning names altogether.

Do you miss the companionship of being in a band?

Yeah, we felt it was something bigger than both of us, something we could fall back on, that we could rely on, as it was ten years of our life.  But the last few years, after I'd done the solo records, I realised I couldn't enjoy myself creatively so much in Arab Strap, as we both had different ideas, and as we both went of and did our own albums, it was harder to come back and compromise.  I do miss, but obviously I am enjoying myself at the moment.

Do you think you'll ever work together again in the future?

When we had the big meeting in the pub when we decided to split up, the plan was never say never, but we're not interested in Arab Strap right away.  We'd like to do something else, because one of the reasons we split up was because we felt boxed in what people though of us and what we thought we should be like, so we couldn't break out of that.  We'd have to have another band, separate to it, to enjoy ourselves, and who knows, in years to come we may feel like doing another Arab Strap record.