By NeilA Last edited 174 months ago
NeilA The Saturday Strangeness 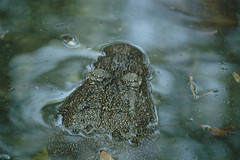 45. Creatures From The Black Lagoon

The capital has a dark history of strange beasts emerging from the silted depths and breaking the surface, causing the general public to flee in terror. Terrapins in local ponds, wild pigs in the sewers, a piranha in the Thames, exotic snakes around lakes and giant rats in the pipes. Mere myths?

In 1996 something even bigger was lurking in the inky waters of Dollis Brook, in North London. The 'monster' was discovered by a Labrador, the pet dog of an off-duty RSPCA Inspector, as they strolled along the stream in Finchley. The dog, like all dogs, enjoyed a frolic and wade but emerged with a bizarre catch. In its jaws the dog had retrieved a creature measuring five-feet in length. The body was rotten, almost beyond recognition but it looked to the witness like a crocodile!

The decomposed corpse was sent off to London Zoo for analysis, but no further information was forthcoming to determine just exactly what animal had been residing in the waterway. No-one had reported any missing pets, or even unusual sightings of an animal that would certainly have feasted on a majority of local wildlife in order to survive.

On 16th August 1997, The Sun newspaper reported that a woman named Jenny, whilst swimming in a Surrey reservoir south-east of Heathrow Airport, was attacked by a beast with a huge mouth which grabbed her by the foot. The petrified victim kicked the unknown predator and swam for shore where her wounds were examined by a marine biologist who concluded that the marks were made by a shark. However, whilst there are a few sharks able to live in fresh water, such as the Bull shark, it seems unlikely that such a fish, which can grow to over ten-feet long, would have been dumped there – and smaller sharks would appear more placid.

Personal opinion is that a pike, or even a large catfish was to blame. Whatever the truth, the next time you're thinking of taking a skinny-dip... be warned!