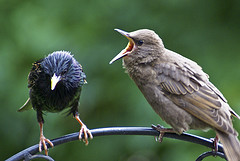 Twinkle, twinkle, little starling, how I wonder where you are(ling).

While the Starling is still the most common bird found in London gardens, their numbers have declined from last year. In the RSPB Big Garden Birdwatch, an annual, hour-long event where bird enthusiasts or anyone with a garden in view is asked to count the different birds in their gardens on a January weekend, Londoners counted 3.14 starlings per garden, down from last year's 3.65.

More troubling, though, is that since RSPB started the event in 1979, the number of starlings counted has dropped by 76%. To help keep the little birdies around, experts recommend growing plants that could provide food and shelter. Starlings specifically like to eat fruit and bugs.

The next most common birds, counted in 13,848 London gardens (who knew there were that many birdwatchers out there?), are house sparrows, wood pigeons, blue tits — which dropped a spot from last year as expected due to the weather — and blackbirds.

Feral pigeons came in at a paltry sixth. Brian, where were you?