By KizzieFK Last edited 154 months ago
KizzieFK Squished Up Worship 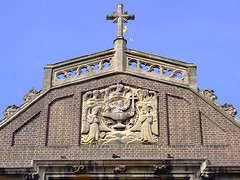 Oh come all ye faithful... if you can fit into the building, that is. It seems that London churches are experiencing a bit of a squish, and not in our grand cathedrals — those are merely full of tourists — but in Evangelical and Pentecostal churches, whose numbers have been growing quickly over the past decade.

About 350 churches are asking for more elbow room for their Ave Marias, but planning authorities aren't green-lighting the expansions. In February, they nixed plans for a mega church because of traffic concerns.

Though most community churches probably want something a bit more, shall we say, humble, the prayer halls are calling religious and cultural discrimination against regulators who are keeping areas earmarked for employment, well, for employment.

The churches are now pushing for a change to the rules that'll allow them to expand into employment zones, but there's no word on whether they'll be successful.