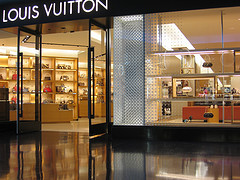 In the world of designer bags, discerning shoppers are willing to put down thousands of pounds for the perfect Louis, Fendi or Birkin. They’ll even wait for years on waiting lists. Now, some may not be getting their beloved arm accessory status symbols due to a rash of bag burglaries.

A crash-helmet-wearing moped gang has targeted high-end retail shops and smashed windows to get to their goods. They’re responsible for thefts over the past two years at Mulberry Design Company in New Bond Street and the Louis Vuitton store near the Bank of England, which was hit twice.

However, these heinous crimes against handbaggery are finally coming to justice. One of the gang’s bag nabbers, Matthew Pitt from Islington, has been sentenced to 26 months in the clink after pleading guilty to the two City snatchings where he and his pals took £24,500 worth of posh purses.

Unfortunately, just last night thieves broke into Anya Hindmarch’s new Bond Street store, and £30,000 worth of spring and summer satchels were stolen. No word on whether the same gang is responsible.