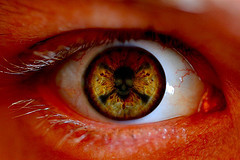 Seeing is quite a big part of our day, reading the news, figuring out public transport and attempting to match our clothes, so we plan on doing whatever we can to keep our vision as long as possible. Luckily, doctors at Moorfields Eye Hospital, led by Professor Vis Viswanathan, have developed a new, painless test to spot glaucoma — also scarily know as the "silent blinding disease" — in its early stages.

The Moorfields Motion Detection Test is based on some software that has you stare at a central white spot surrounded by white lines on a grey screen. All you need to do is click the mouse each time you see one of the lines move. Not exactly an exciting video game, but it gives doctors a good picture of any potentially lost vision. Eventually, the hospital plans on making the test available online.

This quick eye exam is supposed to be more accurate than current standards and especially good at catching glaucoma in its earlier stages — say, when it can be treated with eye drops instead of surgery.

Starting in April, the Moorfields test is going through clinical trials in Toronto, Rome, Africa and Singapore, and if all goes as planned, it should be released for use across the UK next year.