Darling, You Weren't So Wonderful 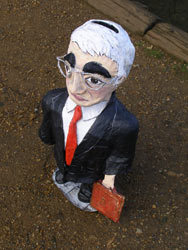 We've been ever so slightly bored by the anodyne coverage of today's Budget from the usual media sources. Luckily, Channel Five has done the decent thing and injected a bit of originality into proceedings. On today's 5pm and 7pm bulletins, Natasha Kaplinsky will be assisted by a 21 inch papier mache sculpture of the chancellor, Alistair Darling.

Ham-based artist Anita Russell, a learning support assistant at Twickenham's Orleans Park School, sculpted the miniature minister after a Channel 5 News producer contacted her. The figure was led on a merry chase around London yesterday, filming in a number of locations, including Darling's Downing Street home, and will be used to "show how the Chancellor is eating taxpayers' cash."

As you can see from the picture, the compact Chancellor bears a striking similarity to his taller namesake, right down to his signature (we're tempted to say only) interesting feature: those brooding dark eyebrows.

Judging by the general reaction to the Budget thus far, Darling might be wise to put his mini-me in the firing line and contemplate a nice relaxing holiday away from the turbulent front benches of British politics.

Many thanks to Anita Russell for the image and information. For more of Anita's work, please visit her website