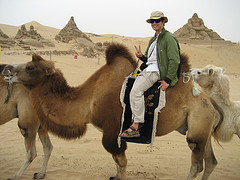 Have you seen Brian? He's 6 feet tall, weighs 30 kilos, and has light brown fur, a long neck, two humps and pink, smirking lips. He also likes to party. Sadly, Brian has been missing since the end of December, and the owner of this life-size resin model of a camel — a company that hosts Moroccan-themed parties — would like him back.

Camels don't come cheap these days — Brian is worth about £1,000 — and those doe eyes, hairy hump mohawk and memories of all the rockin' Moroccan nights he dressed up are invaluable.

While the case remains open, the only clues to his disappearance we're privy to are that there were drag-marks left in the street outside a Gibson Hall marquee in Bishopsgate, where he was last seen, and he disappeared between December 27 and 28. Police are now asking for your help in tracking down the Bactrian burglars so Brian can get back to his busy party schedule.

Image of what Brian would look like if he were real courtesy of rogoyski's Flickrstream. Check out the real Brian here.