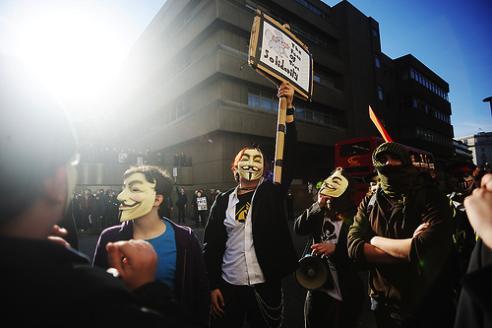 They came, they saw, they protested. And trolled Scientology IRL. Meme-heavy but fun, good-natured and above all peaceful, the hordes of Anonymous donned their V masks and descended on the sites of the Church of Scientology, at Blackfriars and at Goodge St.

The 'organisers' of the protest - although Anonymous is more an anarcho-syndicalist commune than a top-down hierarchy - professed themselves thrilled with the turn-out, which ran to a couple of hundred at least. Anonymous was joined by other groups such as the "Freezoners", people who believe the information held by Scientology on Dianetics and the practice of "Tech" should be free for all and not paid for, as well as long-term critics of Scientology who were delighted to see their baton picked up by a new generation. 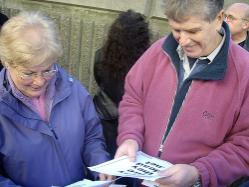 We spoke to long-time anti-CoS activists Bonnie and David Woods (pictured) who run an organisation which helps people leave Scientology called EscapeInt. Bonnie said: "I got into Scientology in California in the late 70s. They use hypnotic techniques on recruits; it's very powerful. It's great to see so many young people here - a new generation. We used to protest outside Goodge St in 1993 and there would only be 6 or 7 of us, and the Scientologists would come out and shout 'What are your crimes?' at us, right in our faces. The involvement of Anonymous has been amazing and we've been following Project Chanology's development closely. It's wonderful to see so many people here today concerned with truth and justice." 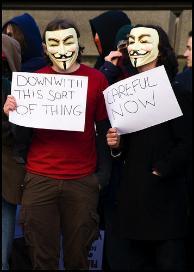 It was stressed repeatedly that this was a protest against the Church of Scientology, not against Scientologists' beliefs - although the volcano/alien spirits/dark overlord Xenu came in for a fair amount of stick. If people want to believe in space aliens or sky fairies, that's totally up to them. Anonymous took exception to the harassment and repressive censorship the CoS is known for, including its heavy-handed use of lawyers, its attempts to smear critics (the aforementioned ex-Scientologist Bonnie Woods' neighbours were given leaflets with her face on, calling her a 'religious bigot' for her efforts to publicise the excesses of some members of the CoS leadership, and the Church was forced to pay her damages in 1996), its creepy anti-psychiatry campaigns (I'd hazard a guess that psychiatry and its associated medications have helped a heck of a lot more unhappy people than the CoS has, and confronting your inner demons has to be better than pretending they are the spirits of murdered aliens weighing you down), and so on. Visit www.whyaretheydead.net or www.xenu.net if you want to learn more about that.

The protesters gathered at Blackfriars at 11am. Music was played - the Fresh Prince Of Bel-Air theme song was a favourite, as was Never Gonna Give You Up by Rick Astley. Chants included "church" (pointing at the actual proper church next to the "Church" on Queen Victoria St), "cult" (pointing at the CoS), "Knowledge is free, Scientology's not", "Why are they dead?", "[L.] Ron [Hubbard] is gone but the cult lives on", "Happy birthday Lisa McPherson" and of course "Hail Xenu". People played banjos and little guitars and sang and clapped and shared biscuits and jelly beans, as the occasional curtain inside the fortress-like "Church" twitched. 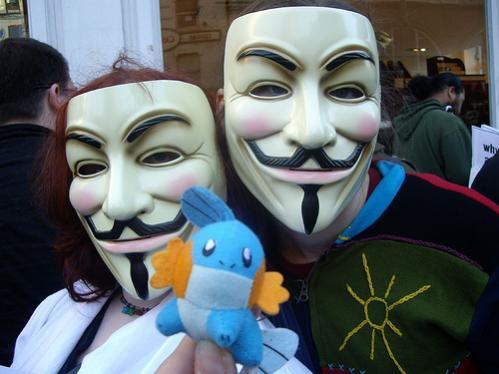 so i herd u liek mudkipz

The police were repeatedly thanked by Anons, and they seemed friendly enough - polite, but distant. Protesters happily followed police instructions given from horseback and kept the thoroughfare free. The City, notoriously dead on the weekend, didn't supply many passers-by to witness the spectacle, but those who did chance across the scene were handed leaflets. Drivers honked horns and were cheered enthusiastically.

The costumes ranged from a lo-fi scarf across the face to full-on - well, just look at the photos. A passing knowledge of internet culture was an aide to comprehension (have a look at Encyclopedia Dramatica, NWS, if you want to learn more) of chants such as "Do not want", "Mudkips", and the like.

After two hours, there was a break for lunch - one cannot troll IRL on an empty stomach, much as one cannot simply take the Tube to Morden Mordor - before reconvening at 2pm at Goodge St. Seeing masked-up Anonymous on the Tube was hysterically surreal - and many more people were educated en route about what it all meant.

At Goodge St, we stood in a taped-off enclosure directly opposite the Dianetics and Scientology centre, waved signs and did our best not to impede the flow of foot-traffic. Many more passers-by were talked to, with reactions ranging from the disinterested to the puzzled to the indignant - against the CoS, that is. Protesters stayed around until 6pm or thereabouts; that's a long time to be out in the sun (and thank Xenu it was a fine, sunny, crisp day; we're not sure how the banners and placards would have held up to a good sustained cloudburst). 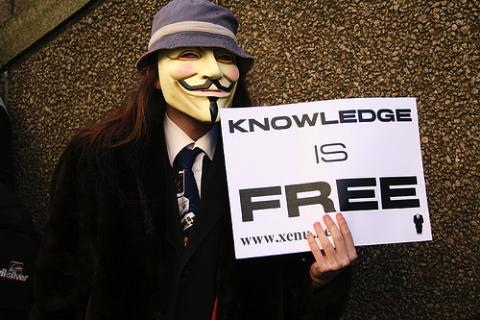 While the nerd quotient was, unsurprisingly high - like, duh - there was a good mix of 'normals' without neckbeards present and even some women (OMG GURL ON THE INTERNET), shock horror. In all, it was a grand day out and hella fun; the fact that it was all for a good cause is just the icing on the delicious, delicious cake OM NOM NOM we must eat it. What the lasting effects will be, well who can say? More events are planned, in London and worldwide; we'll keep you updated.

In conclusion: Anonymous delivers, as the people leading the conga line declared.