There's A New Scourge In Town 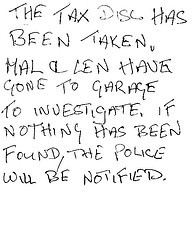 Hoodies to the left of us, police marksmen to the right, here we are stuck in the middle with... hmm, an angry Chelsea Pensioner. Or at least a pensioner from Chelsea, one Eric Williams, recently jailed for four months for attacking a couple of car salesmen.

Old Eric's a bit of a bad boy it seems, been in trouble with the law before (racially aggravated harassment and assaulting a police officer) he started throwing chairs at Mercs and emasculating those who cross him. So you can only imagine the note of gravitas in Judge Susan Williams' voice when she pronounced sentence:

It is very sad to see a man of your age who continues to offend as often as you do.

The courts have given you one chance after another to see if you can stop getting into trouble. It hasn't worked.