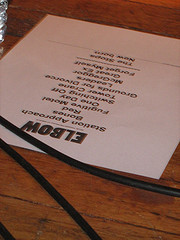 Elbow have long been favourites of Londonistas past present and future, so a last minute opportunity to catch Guy Garvey and his band of burly Bury boys was too good to miss. And if this show, set in the stately Victorian, chandelier decked environs of Bayswater's Porchester Hall is merely a warm up for the real thing, then the real thing could be really quite special indeed.

The sound is spot on, Garvey's voice whispers and roars and as he seems to be playing less guitar these days, he's free to roam the stage, smiling broadly and cracking jokes with both band and audience. The old material is well selected and nicely interspersed with a smattering of new songs, which, in our humbled opinion, could be their strongest yet. Seine kissed Parisian melodies flirt with steaming Spanish influences before bursting into testicle exploding 70s rock riffery. Soft and gentle, hard and heavy, ah, such is the Elbow way and let's not forget a damn fine sing-along chorus to keep audiences happy from wherever to Glastonbury. If Elbow were a movie, they'd be some beautifully cool but accessible European art-house flick directed by Shane Meadows, with a couple of really gnarly car chases thrown in for good measure.

At the end of the show, Garvey dedicates Newborn to the pregnant lady in front of us (if you're reading, we're sorry we forgot to say goodbye) and jokingly acknowledging the dark subject matter, if appropriate title, changes the first line to: "I'll be the duck in your bathtub..." As the song explodes into a fuzzy ball of noise, covering the smiling audience in a sticky placenta of joy, we run back over that line he made us all sing earlier:

One day like this a year will see me fine

Elbow have a new single, album, and tour all coming soon.