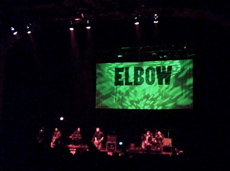 Starting with, for us, the best track on their latest album, Station Approach, and ending on the second-best, Forget Myself, Elbow took Brixton by storm last night, and not for the first time. The feeling is, however, that this time they deserved it all the more.

Touring an album that is stronger than Cast of Thousands, Elbow have ditched the visuals that have hitherto been a major feature of their gigs, and let the songs speak for themselves. The slower songs from current album Leaders of the Free World, such as My Very Best and Puncture Repair, flourished in the space afforded to them, with the bombast of the louder songs switched for subtle underpinning. Older favourites Red and Powder Blue also made an appearance, still sounding as divinely-inspired as ever.

While Elbow have always been a strong live band, and many songs from Cast of Thousands, especially Grace Under Pressure (dedicated to their friends Alfie, RIP), indeed make much more sense when performed live, they seem now to have come to terms with their popularity. They're comfortable in their own Brixton-Academy-venue-sized skins and seem to have got to this stage by letting Guy Garvey take all the limelight, something he seems able and wiling to do.

This cuddly bear of a man has a voice which can suggests emotional fragility yet holds so much strength you could easily imagine it carrying to the back of the venue without the aid of amplification. Less chatty this time round, Guy Garvey nonetheless somehow throws out a blanket of inclusiveness, even getting the Brixton crowd to sing Happy Birthday to his brother. He is a true star for these times, both accessible yet possessing extraordinary talent, the fact that he, his band and their music are flourishing is a comforting thought in these X-Factor times.