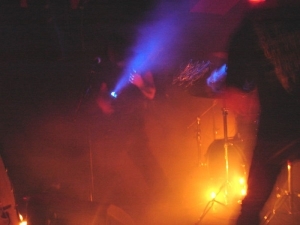 On rare occasions a live music show is so complete that it goes beyond mere listening to physically experiencing the music. Wolves in the Throne Room managed to achieve that in their set at the Camden Underworld on February 10th.

Although it's hard to describe their sound, Wolves in the Throne Room play an atmospheric approximation of black metal that is simultaneously both minimal and majestic, arising from excruciatingly deep sorrow for the suffering of the Earth. (Well, it makes a change from the usual "HAIL SATAN" lyrics often found in the BM scene.)

Though the live experience was only marginally connected to group's recorded sound, that sorrow was well communicated last night. The trio's deafening wall of noise transcended musical genres and mesmerised the audience into a trance which held until the cathartic moment when they left the stage as wordlessly as they had taken it.

It was visceral, powerful music that rumbled deep inside you, a wash of noise held together by fervent drumwork and punctuated by piercing, alien screams. In all its brutality, the music they played still managed to be harrowingly beautiful and enchanting, leaving those present touched. They didn't play songs, as such; rather, the set flowed from one ‘movement’ to another, uninterrupted by chatter with the crowd or with each other.

In an almost pitch-black Underworld, the effect was overwhelming. We couldn't really see much but it didn't matter at all; the music was the show, rather than flashy lights or a corpse-painted singer or other gimmicks. The crowd remained largely static, gently headbanging, pinned to the spot by the waves of crushing riffs interspersed with ghostly, elusive melodies.

The feeling of unity in the crowd was near-palpable (although maybe the pre-gig pints had something to do with that too) and at the end we were left gasping and bereft, wanting more. An hour passed in mere minutes, or so it felt; and for at least two of us, the post-gig euphoria lasted well into the next day.

We're sorry to have arrived too late to hear the two support acts; Irish band Altar of Plagues were particularly praised by fellow gig-goers we chatted to afterwards, and are a band to watch, it would appear.

Since the members of WITTR have opted to carve out a self-sufficient life on a farm in their native Washington state, taking the nihilistic Weltanschauung often thematically present in black metal beyond the mere metaphorical to its logical conclusion, those present should be grateful for the sacrifice they made in bringing the Wolves In The Throne Room experience to the urban chaos that is Camden.

We only hope WITTR were not so traumatised by London's busy streets that they will not return, and soon, as we can't wait to see - perhaps we should say "experience" - their live set again.

By Kai, Jo and Dave K

Picture of WITTR @ Escape, Vienna, courtesy of zoranishell; Londonist's own attempt at a photo didn't exactly turn out too well