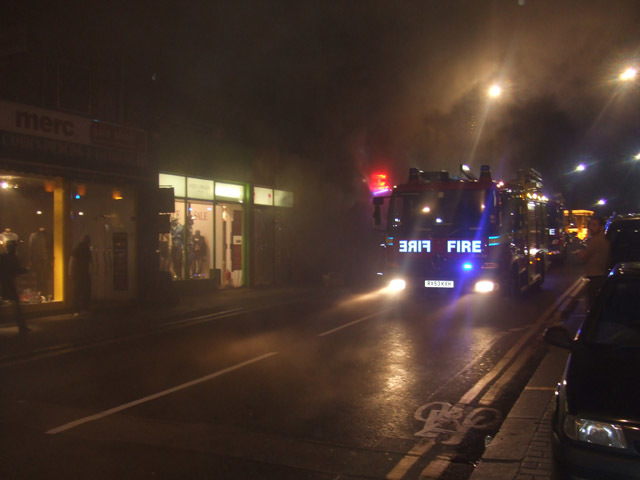 A major fire has broken out in Camden Town. Part of the Canal Market, Chalk Farm Road, caught fire around 7pm. As dense black smoke billowed out from beneath shutters at least four fire engines and a surveillance helicopter rushed to the scene. Nearby shopkeepers rallied together bringing buckets and extinguishers.

The market appeared to be closed and there is no indication of any injuries.

7.50 This is a major, major fire. At least 10 emergency vehicles are now on the scene. The fire can be seen from miles around.

8.10 The news channels catch up. Sky reports that the fire has spread to surrounding buildings.

8.20 Sky suggest that people may be trapped in the buildings. Several ambulances have just raced down Haverstock hill towards the scene.

8.30 BBC News 24 confirm that 'an unknown number of people are trapped' in the buildings. Nothing on their website yet though.

8.34 Sky News are showing footage of huge flames towering over buildings. 20 fire engines are on the scene.

8.34 The BBC finally get a report on their website. With a stock photo of the wrong market. Nice work guys.

8.40 Ah, the beeb have a proper photo now. Flames are leaping 30 ft in the air. Two more engines have just gone down Haverstock Hill. The fire continues to spread around the area. Sky News are speculating that there is a petrol station in the area. We're not aware of one (the nearest is several blocks away), although there are garages nearby.

To clear up confusion, this is the CANAL MARKET, which sells mostly clothes and jewellery, not the Stables or the Lock market, as some reports are suggesting.

9.15 It's all over the news now. BBC News 24 are broadcasting live pictures of the fire, which is still raging, by all accounts. Much of the surrounding area is being closed off.

There have been some reports of drinkers in a nearby bar hearing a loud explosion at around the time the fire started, although this has not been confirmed.

9.30 Witnesses are reporting that the fire may have started in a market stall just behind the extremely popular Hawley Arms pub, which would probably have been very busy at the time. BBC News 24 is broadcasting pictures that seem to show the plants on the pub's roof terrace on fire. Fortunately, it seems that the pub was evacuated safely. 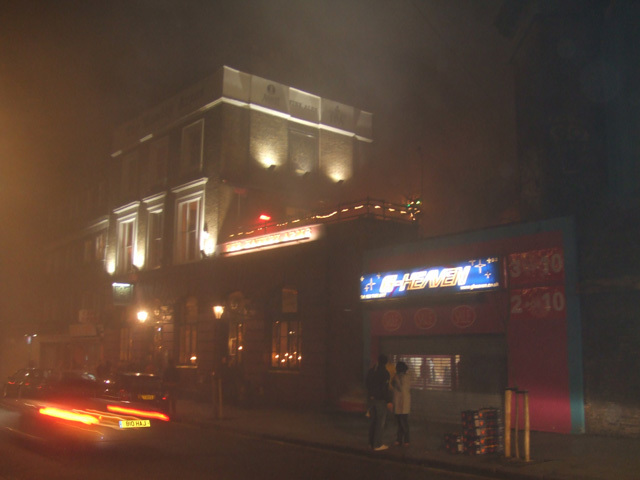 Above: The Hawley Arms shrouded in smoke, a few minutes before fire officers cleared the area. Photo by M@.

9.40 A spokesman for the fire service has just said that "there is currently no information of any persons involved in the fire". Whatever that means.

Eyewitness photos have started to appear on Flickr. This shot, looking eastwards over the lock towards the market, is courtesy of DrPete. 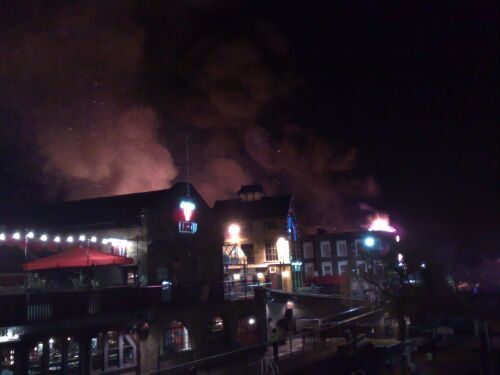 11.50 The good news is that the fire is now under control, and that there are no reported casualties. However there has clearly been extensive damage to the markets and nearby premises, including the popular Hawley Arms pub.

The following video was taken at 7.05, seconds before the first fire engine arrived.