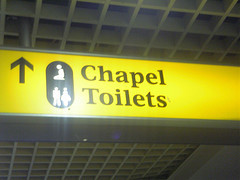 After recent revelatory reports that constant night time aircraft noise is actually rather annoying and not very good for you in the long term comes the news today that flight paths in and out of Heathrow, Luton and Stansted are to be reviewed. Sounds a bit alarming to Londonist – one of the proposals involves leaving the airplanes higher up for longer, and then bringing them down a bit sharpish. Er? Not on our next beano to Benidorm they ain't. Anyway, the general idea is to move the planes’ trajectories from busy built up bits and shatter the peace and quiet of some nice rural parts instead.

But the air industry seems to have its indirect defenders. Take chef Anthony Delaney: so smitten was he with Gatwick Airport that he, um, moved in. About 3 years ago. Intriguingly hot on the heels of that Tom Hanks film. He ate, slept and washed there, just popping out occasionally to collect some free money from the government. Unfortunately for our friend, his dramatic gesture of postmodern irony came to an end (after more than 30 run-ins with the police mind you) recently and he is now up in the dock and awaiting sentencing. Quite what they will charge him with we can’t quite work out: inappropriate use of an airport bench? stealing left-over food and unwanted newspapers?

Anyway, Londonist is tickled by this story. Hey, what’s not to like about an airport? It is buzzing with the promise of holidays or reunions to come, happy shiny people, nice coffee smells, gloriously cheesy shops and the constant spectacle that all human life has to offer. The only surprising part of it is that we don’t hear of this sort of thing more often. Although perhaps this is the real reason that airports always seem so crowded.