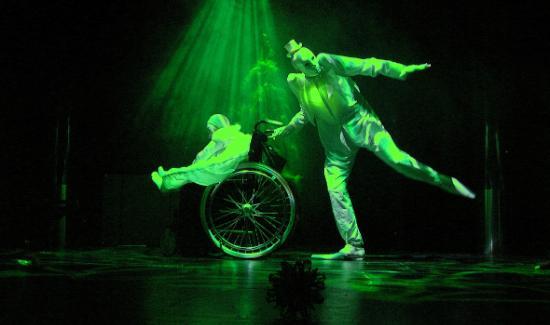 True to the form of mime, there are no words to describe Astronomy For Insects. Russian company BlackSkyWhite's jaw-dropping performance at the ICA last night proves that mime can be far, far worse than a skinny man in a stripy top trapped in a glass box: mime can in fact be bloody terrifying. Astronomy For Insects was absolutely and relentlessly hide-behind-the-sofa scary. There were moments only witnessed through fingers clasped over the eyes. There were other moments that induced flinching in this particular reviewer. And all without a single word being uttered.

It was a 70 minute jumble of unconnected scenes, like receiving flashes of someone else's nightmare with all the sound tuned out to just grating white noise or inexplicable Soviet military music. The scenes were populated by misshapen characters lurching, spinning, jerking and shuddering around each other, interacting with either violence or sinister benevolence, brandishing some extraordinary props and wearing seriously disturbing costumes.

The opening sequence set the tone with two of the performers in a Frankensteinesque scenario, attempting to bring life to a sagging white dummy on a wheelchair. The tenuous, anxious movements around the dummy were performed entirely to white noise which escalated into a booming industrial sonic assault when the 'dummy' leapt into awful, distressed life, squirming, twisting and jerking in an extraordinarily frightening way. Imagine the scene in Bladerunner when Daryl Hannah gets shot and drops to the floor twitching and shrieking. It was like that, but oh, so much longer and more agonised. Other scenes followed involving a clown-faced Santa bringing new legs to a little girl in a wheelchair, a soldier dreaming of a girl with a beach ball and an electric dance duet between a woman and a moving laser dot.

Russian company BlackSkyWhite are an excellent inclusion in the London International Mime Festival programme, bringing an interesting dimension to the mime genre but staying firmly within its constraints. Looking at the programme overall, it seems mime has an extraordinarily broad remit in 2008: there's puppetry, contemporary dance, video installation, juggling, clowning, aerial and circus skills. Indeed, Astronomy For Insects teetered on the edge of other mediums at almost every point, utilising an array of props, lighting effects and dance movement to create a performance that defied classification. But always, as things progressed, there would be a prop or a gesture or a new twist introduced that brought things firmly back to mime, with the three performers using nothing but gesture to convey meaning and action. The sequence with the little girl learning to walk again was pure mime, expressing her joy, her mischievousness, her new found hope through movement alone.

Astronomy for Insects was certainly challenging and suffered an unfortunate saggy middle, caused by an extremely strong start and a lack of linear structure to carry that through. By the end, all was forgiven as the inventiveness and just plain differentness of the production had the full house applauding with gusto.

Astronomy For Insects by BlackSkyWhite is presented as part of the London International Mime Festival. For the full festival programme and more information about the artists, go here.