Panto Preview #4: Not Just For Christmas 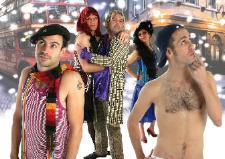 'Tis the end of panto-season. No more Ross Kemp in Wimbledon, no more Suzanne Shaw at the Barbican - even Ian McKellan has vacated the Old Vic. Soon the time will come when we pine for hairy men in frocks and Technicolor landscapes. However, to ease us gently out of the season, London FrontRunners is putting on two charity performances of Charles Dickens’ A Christmas Carol at the Drill Hall this Sunday 13th January.

Well, when we say Charles Dickens’, we’re not being entirely truthful. Old Dickens would probably be spinning in his grave if he saw that "Scrooge’s celebrity niece Kelly has gone into hiding (or is it rehab?)" and "Bob Cratchit just wants someone to help roast his nuts".

The first performance, at 4 pm, is in support of Stonewall, which is a charity that promotes equality and justice for lesbians, gay men and bisexuals through education and lobbying throughout the country. The second performance is at 7.15 pm, and is in support of the Drill Hall itself. The Drill Hall is one of the many arts institutions that have lost their grant from the Arts Council. Since the cuts were announced, many smaller theatres, theatre companies and performance spaces are in danger of closing up shop. The Drill Hall in its current formation has existed for 30 years and continues to promote and produce new performances, in particular that of a gay or lesbian sensibility. It is in dire need of funds even with the grant and is thus in real danger of having to close down. Without the Drill Hall, London will lack a distinct and capable performance and educational space.

Entry to each of the two performances is at least £8 (but the sky's the upper limit). If you can't make it, you can still support both Stonewall and the Drill Hall, of course - by donating via their websites, volunteering to do work, or, in the case of the Drill Hall: send a letter to the Arts Council, explaining exactly why you disagree with the cut in funding.

Click for more information about London FrontRunners, Stonewall and the Drill Hall.