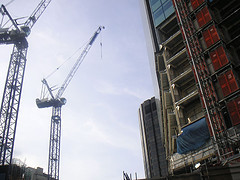 Londoners get quite passionate about music, it seems. But not always the right sort of passionate. A row over reggae music (too loud? wrong artists? Londonist would really like to know more about this) left one builder with a boom-boxed head and another with a bit of his ear missing. Neasden chef Michael Jenkins was on a, erm, ‘car-ear break’ working on a building site when he became embroiled in the row and bit a co-worker’s ear. Perhaps he was just missing all of that free tasting and picking that chefs get to do.

In this particular case, the judge at Southwark Crown Court accepted that Jenkins was awfully sorry (he even offered to return the ear part, presumably suitably marinaded and dressed), and as the accused had been thumped first anyway he was let off with a y-ear’s probation.

W-ear-d thing is, there’s a lot of this actually rather girly violence around. Just this New Year there were two incidents of ear assault, and then of course ten years ago there was big girl’s blouse Mike Tyson. This sort of behave-ear definitely belongs in the scratch-your-eyes-out-bitch-hair-pulling section.

Now Londonist is all for a bit of conventional ear nibbling, but this? It’s all very odd.

Building site piccie courtesy of cluross’ flickr photo stream. An ear picture might have been more apt, but eurrgh! Just doesn’t do it for this Londonista.