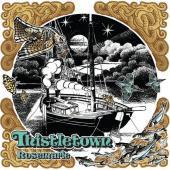 If the Guardian hadn't given Will Hodgkinson £5000 to start a record label then Londonist wouldn't be spending Friday night in a folk club in Euston. But we're here for the album launch of Rosemarie, the debut long-player from new young folkers, Thistletown.

Strangely the place does not fully resemble a hive of outcasts from The Wicker Man: bristling beards and woolly jumpers, curling tresses and flowing dresses. There are day we say it, young people there. Even attractive ones. Some very attractive ones but we're getting distracted. Folk's cool folks. Vashti Bunyan's selling telecommunications, Devendra Banhart's in the NME, and Seth Lakeman's cancelling Glastonbury slots to play Hyde Park.

To be fair, there are a fair few beards up on stage, as are there flowing locks aplenty. There are also many stringed things, bells, trumpets and curved wooden flutes, maybe lutes. Unfortunately this proximity seems to be playing hell with the sound, and the feedback is in danger of winning. Which is a shame because these many boat dwellers from Falmouth have created a really quite lovely album of entrancing gentle medieval folk, that wouldn't be out of place on the soundtrack of a film like, say, The Wicker Man. It's not twenty-first century, but that's the point.

We'd hate to use the term haunting, but a quick scan of the Thesaurus leaves us no choice. Tiffany Bryant and Lydia Tweddell double track each other like rose petals in a spring bloom (ahhh) over melodious pop ditties to their floating home, Rosemarie, or a touch of funksome beats, Labyrinth. Live they give the songs time to build, it's a little like being at a post-rock gig with far less amplification, and the extra heads on stage bulk up the sound nicely, adding an edge to the rural down of the album.

The disruptions of the nerves inducing feedback aside, Thistletown are still a young band, they're a fine addition to the wide spectrum of the British folk scene, and a little more road experience should see them busting some fine moves at various festivals throughout the summer.