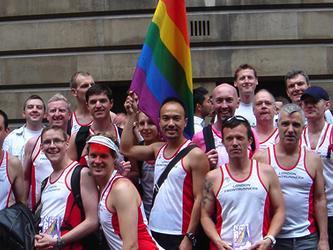 A couple of weeks ago our attention was drawn to the London FrontRunners, a running club that somewhat surprisingly had decided to stage their unique version of A Christmas Carol at the Drill Hall. Running and acting not being the most obvious of bedfellows, Londonist decided to find out who or what the FrontRunners really are.

We met Graham Kennedy, one of the two Presidents, and Leila Brosnan, a long-standing member, just before they headed out for a run.

Who are the FrontRunners?

London FrontRunners is one of the biggest running clubs in the UK with 230 members. Twelve years ago, it was founded by Mark Forest, when he moved to London from USA, where he had been a member of the International Frontrunners. There are FrontRunner-clubs all over the world, and we have arranged several exchange trips. We also have the London FrontWalkers, for people who prefer walking.

Why should we start running? Can’t we just play tennis on the Wii?

When you first start out, you don’t have to have any skill. Even though running may be seen as an individual sport, running with other people can give the impetus to continue training. You’re with people who all enjoy running, so there’s a lot of support. Particularly in London FrontRunners, you’re with a variety of people – it is open to all, not just gay men and lesbians. It is friendly and there are different levels of involvement and ability.

Graham: It is a personal challenge. You get out of the office. If you run races, you get to travel. It’s social; you can chat, while you run.

[Londonist at this point begs to differ]

Leila: When you can chat, then you know you have improved!

Tell us about the Christmas panto.

We organise many non-running events: we usually have a meal after each evening run, we go to the pub, arrange cinema evenings, theatre, concerts, wine-tastings… Our Social Secretary, Martin Hooper, came up with the idea of the panto in 2006, so we did Cinderella for the Christmas party. This year we did A Christmas Carol, which we performed twice at the Drill Hall. It was a great success, and we do everything ourselves, write, direct, act…although none of us are professional performers.

Graham: It’s great to try things you haven’t tried before, even though it is daunting – I suddenly found myself on stage this year…

You also organise the Pride Run?

Yes, 2008 is the fifth year of the Pride Run and the whole event is arranged by London FrontRunners. The idea was conceived by a member, Niv Ben Yehuda, and we now have a separate committee that only deals with that. There are about 600 runners, mainly from London, and all proceeds go to charity. Over the last four years, we have raised £15,000 from the Pride Run and the panto.

Which charities do you support?

Last year it was Stonewall and the Drill Hall, but previously we have supported Terence Higgins Trust, Macmillan Cancer Support and St. Barts Hospital.

How did you get involved?

Leila: I moved here and saw a notice in Time Out – when you are new to a city it is a great way of seeing the city and meeting new people.

Graham: I was signed up to do the London Marathon and needed somewhere to go for a bit of support.

What is the best place to run in London?

Both: Hyde Park – around the Serpentine - the still water is relaxing

Graham: Also very popular is our South Bank run on Monday evenings: we start at Westminster and take in all the sights: Big Ben, the London Eye…

What is your favourite mode of transportation?

Both: Not the tube!

Graham: The riverboat: it is relaxing, there is no pushing, you’re above ground…

Leila: Walking. There is nothing like walking after having had a bad day at work.

What is the best thing about running in London?

Graham: The variation in the runs you can do. There are parks, the river, Regent’s canal – Hampstead Heath for hill training.

Leila: The climate. You can run for most of the year.

Leila: The climate. When it rains.

And how can we join?

There is a membership form on the website, or you can email us or give us a call. We are especially keen to get more female members!

The London Pride Run 2008 will take place in Victoria Park on 16th August and is open to all, against a small booking fee. Book your place here.

Image of a few FrontRunners at the Pride London Parade 2007, courtesy of the London FrontRunners.