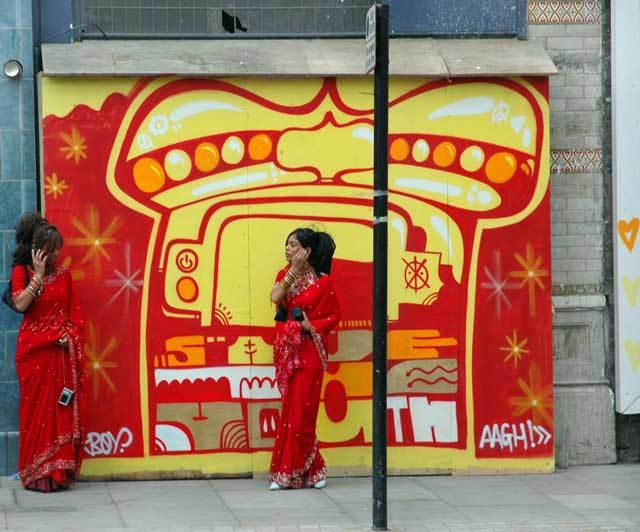 You’d be forgiven for thinking that artist Sickboy had lived in London for several years. His temple icons are hard to miss on even the shortest stroll down the obscurest of Shoreditch or Tower Hamlets streets. However, he’s lived here for less than a year. And as busy as he’s been since his moving to London, he still made the time to sit down and answer a few questions about his art for us.

- So, how long have you been a graffiti artist?

- How long have you been in London and what were you doing before you came here?

I have only been here six months, before that I was living in Bristol. It’s a great city. I have a lot of great friends and creative acquaintances there, but after eight years you run out of places to paint … and the city is or was lacking in art space. So a move to London seemed logical.

- What do the temples in your paintings symbolize?

The temple icon has become what people know me best for. It is meant to represent love and positivity in the shape of a building. The colours are there to make you happy, and my graffiti is not supposed to push you away or make you feel isolated. I want everyone to be in on the party.

- Word is that you're branching out and working on some three-dimensional versions of your temples. Care to elaborate and tell us how this project came about?

I have always imagined my temple icon as a 3-D building that until now has only ever been realised in the form of a 2-D image on various surfaces etc. Like most artists, I’m always trying to push my work on to the next level, and the obvious progression is 3-D representation. It was important for me not to mass produce these. I wanted to do it all "in house" so only two of us were involved in the project and I limited the run to 250 all signed and numbered.

- How can readers get their hands on your temple models?

Keep your eyes peeled for a solo show in April. I'll be putting details on my site soon! Thanks.