House On The Stawberry Hill 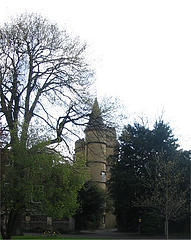 Well, blow us down with a wrecking ball, it's refreshing to see a piece of news about someone trying to save an old building rather than tear it down and turn it in to a pre-fab pimp palace. Don't get us wrong, we can't wait for the day all those crusty red-bricks are gone, replaced by a skyline of rising chrome and steel, surrounded by a slum where we can stick all the nurses and teachers and firefighters with the rest of the dregs and bloggers. But what with life in the city looking distinctly on the down, the market for expensive housing may be taking a tumble.

So a good time for English Heritage to step in with a £100 000 preservation grant for Strawberry Hill House, over in Strawberry Hill. That's near Richmond for all you North Londoners out there. Horace Walpole's 18th Century Grade 1 listed building was added to the World Monuments Watch List of 100 Most Endangered Sites in 2004, and is considered to be one of the most influential buildings of the early gothic revival. It even had it's own printing press. The total cost of renovation is a snip at £8 million with additional funding from the Lottery.

Horace Walpole wrote a ton of letters, was Nelson's cousin, and is said to have coined the term 'serendipity'.